Will Polanski finally face the music? 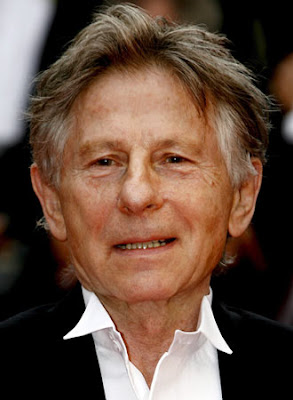 I go to the BBC website find out who won the Singapore Grand Prix (Lewis Hamilton by the way) and I see the headline that Roman Polanski has been taken into custody in Switzerland on a 31-year-old US arrest warrant.Polanski was detained on yesterday as he arrived in Switzerland to collect a lifetime achievement award at the Zurich Film Festival.

The Swiss justice ministry said he was being held ahead of a possible extradition to the US for having sex with a 13-year-old girl in 1977. Mr Polanski fled the US in 1978 after pleading guilty to the charges. In recent years, he has tried to have the rape case dismissed, but a US judge formally rejected his requests in May. He claims the original judge, who is now dead, arranged a plea bargain but later reneged. Earlier this year, Judge Peter Espinoza agreed there was misconduct by the judge in the original case, but said Mr Polanski must return to the US to apply for dismissal.

Mr Polanski's lawyers said he would not return to the US because he would be immediately arrested as a fugitive. The victim, Samantha Geimer, has previously asked for the charges to be dropped, saying the continued publication of details "causes harm to me, my husband and children".

The Swiss justice ministry said on Sunday that Mr Polanski was being held under a 2005 international alert issued by the US government related to a 1978 arrest warrant. He will not be sent to the US until extradition proceedings were complete, the ministry added.

Polanski has not set foot in the US for more than 30 years. He has even avoided making films in the UK for fear of extradition.

France's culture minister said he was "dumbfounded" by Mr Polanski's detention in Switzerland. Frederic Mitterrand said he "strongly regrets that a new ordeal is being inflicted on someone who has already experienced so many of them". He added that French President Nicolas Sarkozy was "following the case with great attention and shares the minister's hope that the situation can be quickly resolved".

The organisers of the Zurich Film Festival said Polanski's detention had caused "shock and dismay," but that they would go ahead with a planned retrospective of the director's work. A special ceremony is planned for Sunday night "to allow everyone to express their solidarity for Roman Polanski and their admiration for his work," festival managers said in a statement.

Polanski is a superb director, there is no doubt, but he fucked a 13 year old after plying her with alcohol and drugs. He has spend the ensuing three decades avoiding the consequences of his crime. Had it been an electrician or the guy who cleaned the swimming pool I’m sure the people who are “shocked and dismayed” at his arrest would have been baying for his blood.

Personally I hope he is returned to the US and serves an appropriate sentence. Artistic merit is not relevant in this case. Frederic Mitterand wouldn’t be dumfounded the next time a child rapist is arrested in France, he and those who can’t accept that a great director should be punished for his acts should stick his crocodile tears where the the sun doesn’t shine.

Wil he actually face punishment for his crime? Sadly I don't hold out too much hope.
Posted by jams o donnell at 5:18 pm

There is no statute of limitations in this country for prosecuting or punishing (statutory) rapists.

I'm glad to hear it!

I've just been looking at this one and am amazed he didn't realize Switzerland had an extradition treaty with the U.S.A. Someone gave him rum advice or else he was set up.

Or he never thought of it. Whatever the reason I hope he goes back to face the music

He is incredibly talented, yes. Knife in the Water is one of my favorite films ever. However, the two issues should be separate. He also raped a young girl and he should have to answer to it fully.

The comment from the victim of the rape is telling, though. These types of high-profile cases make shreds out of the person who is most in need of protection. That doesn't mean I don't think RP shouldn't be prosecuted, just that I feel for the girl, who is trying to get on with her life.

The lady has "moved on" according to her own words, but I guess justice is justice and nobody can be officially forgive just because the victim has already moved on.

I can't believe so many people are on his side - as if they couldn't differentiate between the man and his art.

I wouldn't know what Polanski has done artistically since he flew his country to escape justice. I boycotted him. The man is his art, and the art is the man. I cannot separate both in my mind. It's not a holier-than-thou attitude. We might all do things (not in this area, but in others) that we regret. But in this case, it was done to a child. Until he has paid his due, he doesn't deserve recognition. I hope that he is condemned to do jail time. I've heard than even hardened criminals are not very kind in jail with a child rapist. Let him have a taste of the hell he has cruelly created in an innocent child's mind and body. She might have moved on. But the memory will never die.

I agree with you on that point Pagan. I do realise that it will be hell for the victim to have this dredged up again. But then again she has been living with it for over 30 years. Perhaps a sentence will help give her closure

I agree wholeheartedly Jay. There is a gaping chasm between his art and his crime

Claudia I agree that the art and the man cannot be compartmentalised, certainly not for a crime as vile as his.

Why is it that celebrities feel that laws do not apply to them? It is long past time for RP to pay for his crime, and crime it was and still is!

I think he should still face punishment. Those that defend him are jerks

Were I that 13-year-old, I would want to see the perpetrator brought to trial for his crime.

I can say from the pov of being raped that you don't want to dredge through this deeply humiliating issue with family around or put them through any of it. It is so personal and humiliating and awful. Her frame of mind now and his status should not stand in the way of justice though. Else we may as well dispense with the rule of law and the age of consent.

What I found shocking reading the case notes today (available on line) was that the original judge asked her why she did not put up a struggle. She replied she was frightened of him. A drugged CHILD in the company of an imposing older adult male. I would have been terrified. What a crummy and ridiculous question to ask. I like to think we have made some progress in such cases since then but sadly I doubt it.

What makes me angry with what I hear is that people have pity on him because his wife has been murdered, and his mother died in a concentration camp. Why didn't those facts give him more sensitivity for the opposite sex, instead of cruelly assaulting a young girl?

I am not oblivious to the victim's feelings but I can't get away from the fact that Polanski drugged and fucked her when she was 13.

Alison the grand jury transcripts make umpleasant reading. She deserved better protection in the process. She probably also deserved to be protected from her mother as well as precented from being fucked by Polanski

THat's a good point Claudia.He has suffered sever taumas in his life there is no doubt. But they cannot and should not mitigate

I am with you on this it was child abuse...

The good thing about it all is that the girl has been able to move on from the experience and not let it rule her life.

Yeah her parents were crummy. But given she was an aspiring actress and model I am amazed they went ahead and reported the rape. Most parents in that situation would have buried the issue for the fame Polanski would have easily secured her. It was a bona fide Vogue teen model shoot after all. The whole thing and the reaction to it from Hollywood is deeply depressing. I had no idea Harrison Ford was a fan of his. Yuck.

I don't know. I don't want to defend Polanski, but the U.S. criminal justice system is a pretty blunt instrument when it comes to sex offenses. It's not as cut and dried as the media is painting it.

I think that it will be the cause of WW III, coming from a completely unexpected angle. France will attack US soon, you see if the don't.

Italy and Poland will join France, UK will join US and the fracas will start to expand.

Just a sec, I was reading The Good Soldier Svejk recently...

Anyway, I don't see why Polanski can't do time while his artistic achievements are celebrated. He may even watch the party on TV...

THanks for all your comments

Lots of people have terrible trauma in their lives and restrain themselves from molesting (not to mention sodomizing!) children. So I do not give him any leeway for his sad history. And did he not plead guilty, THEN flee the country? It's not like his innocence is even in question! He's just a coward.

And what do you think about the victim not wanting him charged? I respect the fact that she has forgiven him and doesn't want it all dredged up again, BUT is this different from, say, an abused wife refused to prosecute the husband who beat her? I'm not sure; I'm interested in what people think of that. Here in Canada, it is now up to the police to charge, for example, an abusive husband and it's more or less out of the abused wife's hands whether or not charges are laid if an assault occurs. Of course if she absolutely refuses to testify in court, what do you do, jail the wife for contempt? Not sure that's the answer either!

My husband used to work as a Crown prosecutor and I've heard some really awful stories over the years...

And as far as the Polanski case goes, would anyone be cutting him any slack were he not rich and famous, not to mention a MAN? Honestly?

Well said Knatolee. I agree with you wholeheartedly

Yes he does need to pay for his crimes and celebrity status should not hinder that process, no one is Above the law.
Great post Jams

Thanks Amanda. I agree!

Just to add my voice to those above in expressing my horror at those who would defend Polanski, or object to his facing the legal consequences of his actions. Any directors or actors who defend this rapist should have their products boycotted by any right-thinking individual.

I posted the text of the petition in Polanski's favour on my blog, out of disgust. And I'm not going to be seeing a film made by (among others) Martin Scorcese, Terry Gilliam, Pedro Almodovar, or David Lynch again (I stopped watching films by Woody 'My son is also my brother-in-law' Allen a long time ago).

Mercifully never watching a David Lunch or Terry Gilliam film will be easy,. the overblown, self indulgent wankers

He is a disgusting loser!