Silly News: Mugabe made tourism ambassador... or perhaps not 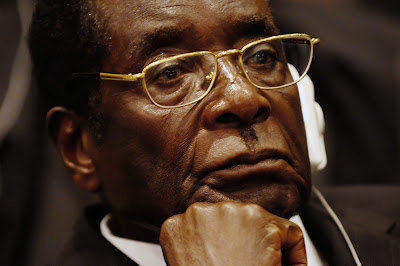 Even though he is banned from traveling to the USA and to EU states. the United Nations, in its wisdom, has designated Robert Mugabe a "leader for tourism" and chosen the Victoria Falls, shared with Zambia, as the venue for a holiday industry conference next year.

The honour was apparently made when UN World Tourism Organisation (UNWTO) head, Taleb Rifai, arrived at the Falls for a ceremony to name Zimbabwe and Zambia co-hosts of the 2013 conference. Also on hand were Mr Mugabe and President Michael Sata of Zambia. The UNWTO denied reports the leaders were being made official UN "tourism ambassadors", saying that an open letter merely invited them to champion tourism. Nonetheless, Mr Mugabe embraced the accolade.

The  South African newspaper  Mail and Guardian followed up this story. It seems that the UNWTO did not betow the title of Ambassador on Mugabe:

Sandra Carvao, the organisation’s co-ordinator of communication, said: “Correct would be to say the UNWTO presented both presidents  with an open letter which calls for them to support tourism as a means to foster sustainable development in their countries to the benefit of their people. The UNWTO does not have an ambassador’s programme and the receiving of the UNWTO or the World Travel and Tourism Council open letter implies no legal commitment or title attribution to the country or the head of state or government in question.”

Walter Mzembi, Zimbabwe's tourism minister tasked with leading the turnaround of tourism in the country, declared the veteran leader a “tourist attraction” and a “national treasure” that tourists would flock to see at the organisation’s meeting.

Or perhaps not. Still it hasn't stopped Mugabe;s minions from proclaiming him to be an ambassador. Ah well

"declared the veteran leader a “tourist attraction” and a “national treasure”"

Reading this about Mugabe I tend to think "uhu... after taxidermy".

Probably better if stuffed and mounted!