Behind a chilling photograph 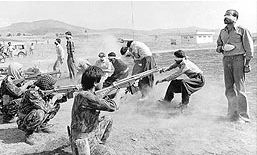 In 1980 a chilling photograph depicting a line of 11 blindfolded Kurds being executed by firing squad was awarded a Pulitzer Prize. Uniquely in the history of the Prize it was awarded anonymously. After more than a quarter of a century later, the photographer has been identified as Jahangir Razmi.

The photograph was originally published by the Iranian newspaper Ettela'at on 27 August 1979, but the editor chose not to credit the photo out of concern for the photographer's safety. The picture was distributed by United Press International and within a few days it appeared in newspapers across the world.

Ramzi’s identity remained a secret until 2 December when he was interviewed by the Wall Street Journal.

Chilling is right. You forgot to add disturbing, graphic, and shock inducing.

You didn't add your personal feelings, jams. What do you think of the photographer coming forth after 25 years?

I hope he hasn't made a mistake. If you haven't done so, have a look at the slideshow of the photos he took that day. You see that one of the executed was on a stretcher. Very chilling

Almost everyone in the region gives them a hard time eg 10,000s gassed in Iraq under Saddam.

It IS a tragedy but my cynical side feels that, given the US is waging a propaganda compaign to isolate Iran, many stories unworthy (or worthy in this case) are being flagged in the press.

Just look at the recent stories on woman in Iran (eg. a female race car driver forced out of the Iranian circuit - a huge crime (not)) then count how many recent stories have emerged about woman in the US's preferred country (Saudi Arabia) where woman cannot drive at all.

Quite probably a lot of stories re Iran would not have had the prominence if relations between Iran and the West were better. I did blog the Laleh Saddegh story as an item of interest.

As you realise I do take a fair bit of interest in Iran. There is not much to commend the Iranian regime (a substantial understatement). I would happily see the theocracy be confined to the dustbin of history. I would not support an attack on the country - all it would do is bring the population together in opposition. It would not bring about regime change.

That said Iran is a much stronger and influential nation than it was 5 years ago. How we deal with the country is a good question.

Thats fine Jams :) While the US/Israel huff n puff with threats to strike Iran some regional countriess are preparing to counter Iran's future arsenal by building their own.

From the Times Dec 14

"With fears that Iran is racing ahead with a programme that will lead to the building of an atomic bomb, the Saudis and their Arab Gulf allies announced that they would be exploring a “joint programme in the field of nuclear technology for peaceful purposes”."

A Saudi bomb could be scary

Any arms race is unwelcome. A middle east arms race is less so. The idea of Saudi getting nuclear doesn't bear thinking about.