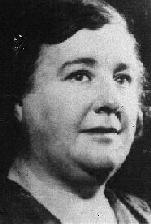 Following on from my recent post about Helen Duncan , the last person to be tried under the Witchcraft Act, there is now a campaign to have her pardoned.

According to the BBC Duncan’s grand-daughter "When she first came back home after prison she was never the same. She always had a bit of a glow about her but she seemed to have lost that. Some people said it was treason. My grandmother had two sons and two son in laws in the forces ... and there is no way she would have given anybody information."

Campaigners to pardon Mrs Duncan have set up an online petition. The campaign is backed by the British Society of Paranormal Studies.

Helen Duncan was a charlatan but her sentence was ludicrous, the result of paranoid times. I doubt the campaign will have any effect though.

My thanks to Hak Mao for drawing my attention to this story.

The adage, "Too little, too late" springs to mind, but it is a nice gesture, at least.

I may take adopt the conciliatory tone here and pardon my mom-in-law for being a witch too!

I cant see it changing anything, the men executed during WWI have been given a blanket pardon but a pardon for a short albeit ludicrous sentence? I doubt it!

LOL ewbl you desire for conciliation is an inspiration!

Someone close to me is a practicing witch who has cast benign spells with 90% effectiveness. This includes protective circles.

She is as harmless as Mrs Duncan.

If any readers from the UK would care to comment on my blog about the effect of Litvinenko's death (radiation!) on the UK I'd be most grateful.

itv only reported that today!

It's ane excellent post Pet. Ach I have meant to go back and comment. I will rectify that forthwith.

As one of those "how quaint" stories, Mullet?

Just call me scoop O'Donnell! What does heevenin mean?

right scoop....it's the guy that stands in argyle street saying, ' eeeevening times, get your eevening times here & also 2pair of socks for 2 quid!