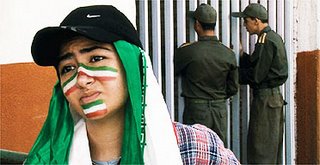 Football films are usually of the quality of Escape to Victory: ie, an utter turkey (except for Saint Bobby Moore’s performance which was of course a tour de force!). Offside, on the other hand is in a different league (I promise no more football related puns, intentional or otherwise). There is no football action as such rather it is a compelling, and actually quite funny film about young Iranian women arrested when trying to attend a key qualifying match for the 2006 World Cup.

Dressed in various disguises, including one in military uniform, the girls are apprehended and held in a small pen where they can hear the roars of the crowd as the match progresses. The girls still share the same anxiety and joy as the fans inside the stadium while at the same time pleading with their captors (mainly young conscriptees) to let the go free. Iran win their match and Qualify for the World Cup finals. Needless to say everyone is euphoric, including the girls even though they are facing punishment at the hands of the Iranian Vice Squad.. You will just have to see the film to see exactly how it ends. 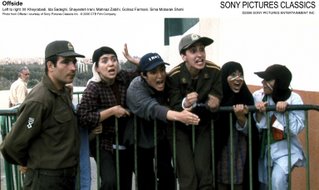 One of the greatest strengths of this film is his use of non professional actors, mostly students. The director asked the girls in the film to turn up with their own idea of how they would disguise themselves as a boy and what is seen in the film was the girls' own attempts. I would also like to point out an Afghan film called Osama which used also used non-professional to astonishing effect

“Whatever happens in front of my camera should be realistic," he says. "When I watch professional actors, I remember what the actor was doing before and therefore make other connotations and it gets removed from the realism that should be in the film."
As with Panahi's previous films about the struggles of ordinary Iranians - The White Balloon, The Circle and Crimson Gold - he has had a battle with the censors, and Offside has yet to be shown in Iran. The wonder is that Panahi was given permission to film at all. He shoots on the hoof. Using a single handheld camera, much of the film was made in real time during the qualifying match. While they filmed a fictional group of women banned from the game in one part of the stadium, "on the same day, about a 100 other women had been kept out. A number of them threw themselves in front of the reporters and some even in front of the bus of the Bahraini players. They were arrested."


Like the rest of Iran, Panahi had no idea if the national team would win and provide the film with a happy ending. "The truth is, if the fate of the game had been different, this would also have affected our film. But I was hoping that Iran would win so that we could have the celebrations at the end."

The issue of women attending football matches tends to rear its head only when the national team is thriving, and Iranian football has made few headlines abroad. When Iran qualified for the 1998 finals the team was welcomed home by a huge crowd in the stadium, among them 5,000 women. "Many others were barred," recalls Panahi. "There was a great deal of discussion regarding how women can take part and watch the games they want to in the stadium. But the issue subsided gradually until once again Iran succeeded in getting to the World Cup."

In June President Ahmadinejad made announced that Iranian women would be allowed into sports stadiums from now on. From a film festival in South Korea, Panahi issued a sceptical statement in response. "Many clerics have opposed his remarks," he said. "I am not very hopeful, because in Iran there are many powers that take the decisions and nothing can be predicted." Sadly his pessimism was borne out. The following week Ayatollah Khamenei slapped a veto on the president's decision. From Vienna, Panahi made another statement: "If there was some hope earlier on, at the moment there is no hope left at all. I will try again to see if the film can be shown in Iran. I know it is a futile effort."

Loved 'Osama'-saw it about a year ago. All the extra footage about the process of making it was interesting, too. Definitely one to add to the netflix list if you haven't seen it yet.
I'll add this one if netflix has it. Thanks for the referral!

Netflix has it in their system as 'save', which means when it's released, they'll let you know.

Yeah, "Remember The Titans" was a superb film. It made me laugh. It made me cry. It made me pretend I only had something in my eye.

Glad to know that despite an oppressive regimist society, they can't fully suppress the dynamic fervor of their women, though, try as they may. Those girls are the ones with balls!

Elizabeth, I swear you and A Payne have seen every obscure movie known to mankind. My only claim to fame is that I've seen all 6 "Ernest" films.

There were six??! (Groannn...) My dad loves Ernest, and the Red/Green show. And I have seen about one-millionth of all obscure movies. Shazzy loves Japanese movies, mainly Kurosawa. I like Chinese and Bollywood. Oh, and School of Rock, which is on right now-so I have to send the kids to bed to get my Tenacious D fix-did you see them last night on SNL?

Osama was well worth watching. I bought a copy of the DVD and it has been out on loan several times. One of my first blog entries was about Osama. I myst update the post.

I hope you enjoy Offside, Elizabeth. It really is very good. They really do have the balls ewbl but all they wanted to do was watch a football match. That makes the film even more poignant.

Ernest films? I've never seen one myself. All I know about them is that the guy who played Ernest played a carny in an excellent episode of the Simpsons...

Ah Kurosawa, brilliant. I love Herzog myself. Then again I love Marrried.. with children!

This is the third time I've had to log back onto the Internet in a desperate attempt to leave a stupid comment here. See how dedicated I am, jams?

I bet wholesome American family shows like Leave It To Beaver, (Yes a wholesome show with Beaver in the title. Who'd have thought?)The Cosby Show, or The Walton Family are banned in Iran, and they only allow Married With Children to show what vulgar infidels we Yanks are and how we must all die!

Ernest P. Worrell got his start in Houston doing commercials for the power company here. The pride! Of course, Jim Varney is now dead, and there shall never be an Ernest Part 7. A moment of silence please for the man who saved Christmas, went to jail, went to camp, served his country by joining the army, went to Africa, got scared stupid, and went back to school. The man is an inspiration to us all.

I dont think Leave it to Beaver was ever shown here. As for the Cosby show and the Waltons... I hope The bundys can be seen in Iran, crass jokes about Al's sex life and the sound of a toilet flushing are comedic materpieces!!

To think I never got to see Varney in action.. Truly I weep!

Hmm, this looks quite good. I will add it to my Netflix que ASAP. Hopefully the release date in the states is soon.

Well worth it Roland, I hope it gets an american release soon

Soccer Live Matches At Your Desktop


There are thousands of High Quality Channels streaming live football from around the world. We are here to show you how to find them. Receive live match links in your mail account. English Premiership Football and European Soccer Streams. Note all matches are as per BST.

Special Introductory offer:
Live match links in your mail account at only £1.00 GBP. Free for First Day if you subscribe it now.

1. Free Software:
We will provide you all software you need to get live match at your desktop.

3. What's Needed:
Just need is to click on the link, start the software and match is on your desktop.

3. Live Soccer:
Watch live soccer online on your PC no need of buying Sky or Cable?