I really wish I had thought of this 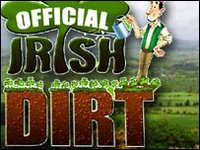 Pieces of Irish dirt are being bought by Irish-Americans so that they can grow authentic Irish roses, or throw handfuls of soil from the home country on their loved ones' coffins. A Belfast entrepreneur, Alan Jenkins, and Pat Burke, an agricultural scientist from Tipperary, have already shifted around $1m (£512,000) of Irish muck to the United States.

Their company, called Official Irish Dirt, has also received online contacts from people all over the world keen to get their hands on dirt from back home. “It's been unbelievable. It's such a simple idea - even the girl in the US Patents Office said so - and it was the first time it had ever been done.” Said Pat Burke

Jenkins came up with the idea during a visit to see friends in Florida where he heard some Irish-Americans at a meeting of the Sons of Erin, a community organisation for people with Irish ancestry, saying they would like to have some Irish sod placed on their funeral caskets. Soon afterwards he met Burke, who worked at the Irish Department of Agriculture, at a dinner party and the business grew from there.

'This is a full-time job for both of us now,' he said. 'We first put the feelers out in July 2006 when we visited New York. The response everywhere was just overwhelming and I thought, "right, that's it". I'm a young man with no ties, and I didn't want to look back in 20 years and think, "why didn't we do it"?' The company also offers shamrock seeds so that customers can grow their own luck

Ach I suppose this would be an opportunity to have a go at Irish Americans and sentimentality about Ireland but sod it! If they want Irish soil and someone is happy to provide it at a reasonable price, who are we to sneer?


Irish dirt
Posted by jams o donnell at 9:13 am

New to me. I learn something every time I visit your site. (Aside: I love the slogan at TPMMuckraker: "They've got muck. We've got rakes.")

I can understand the instinct to want a bit of the soil from home, but I don't think I'd buy dirt from a Houston bayou bank if I were suddenly transported to Ireland. Of course, Houston isn't exactly romanticized in story and song; hell, we even pronounce the name oddly!

Lacking Irish dirt and lacking any inclination to buy some, I suppose I'll make do with the Irish blood in my veins from five or six generations back... even if it's mixed with English, Dutch and French. Musician friends from the Netherlands tell me that by my appearance I could go for a walk in Amsterdam and people would speak Dutch to me... but I'll claim my rightful Irish ancestry even if I don't look Irish.

Good one Steve. I wouldnt rush to buy Romford soil either. As for my irish ancestry I am an Irish citizen in that I am entitled to and actually hold and Irish passport.

I'm not one for a lot of Irish things though St Patrick's day is not a bad day for a piss up, mind you! I won't drink green beer for love nor money, not that I've ever seen it on sale

Is this a good idea when you live on an island? The reason you buy land is they aren't making any more of it, and with global warming there's less every year.

I'm not sure I'd be sell off the land under my feet unless I already owned someplace to stand on firmer ground.

Hmm I had not thought of that, Bryan but I doubt that sales will be so large as to level mountains!

Had it been the Maldives then I would be worried!