Chim chim cherite, we are the bastards in yellow and white 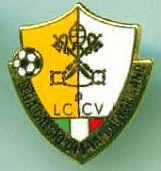 The 72-year-old Juventus fan was speaking after he launched the Clerical Cup, a 16-squad tournament for priests and trainee priests in Rome, said "I would not rule out the Vatican putting together a top notch team in the future that would be on a par with Roma, Inter, Genoa and Sampdoria." He suggested that Brazilian seminarians alone would be enough for a "magnificent" Vatican team, while African and Argentinian students are also reportedly in demand by priest-managers ahead of the Cup.

Italian football has been plagued by match-rigging. Who knows, it might receive a moral boost form having a Vatican team in the top flight! It would certainly open the floodgates for a whole series of religious football puns such as the God squad while opposing fans may start singing “you’re going home in a fucking Popemobile”..

There actually is a Vatican City team but it has only played one “international” and that was against Monaco (not the successful French league side though).

Vatican football
Posted by jams o donnell at 10:35 am

The sight of dog-collared, football hooligans rooting for the Vatican team while smiting enemies with heavy crucifixes (AMEN!) would be awesom.

That was an incredible post. What next, mullah soccer?

Enough teams and there is the chance of a contest to see which is the One true God! I wonder if the supportes will knowck lumps out of each other??

Hmm... what are the consequences of defeating The Pope's Team? Do you get a red card from God?