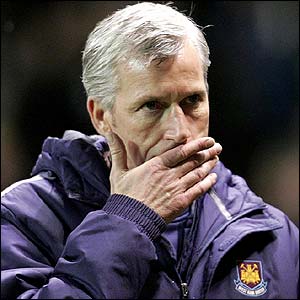 Alan Pardew has been sacked as West Ham manager. This news comes as no huge surprise given the team’s performance so far this season

Although Pardew took West Ham to ninth place in the Premiiership last season and to within minutes of a famous FA Cup win over Liverpool, this season has been disastrous: four wins out of 17 Premiership games and early elimination from the UEFA Cup.

First-team coach Kevin Keen will act as Caretaker Manager pending appointment of a successor. Alan Curbishley a former West Ham player, has apparently been touted as the favourite to take over.

Ah, the fate of coaches around the world, no matter what the sport. The first firing I recall paying attention to was of a really ineffective coach of the Houston Rockets (our men's pro basketball team), after which they hired Rudy Tomjanovich... who led them to two championships in 1994 and 1995. May your fortune be as good as that!

Here's hoping.. Our form this year has been pretty dire. Priority one will be avoiding relegation.

Our Houston Texans football team is abysmal with our quarterback David Carr scoring negative numbers in yards passed last week. Holy cow that's bad! But no, instead of replacing him, it's the usual rigamarole of switching out coaches.

Negative yards means he went backards ewbl? It sounds like he needs to shape up or risk being sent yo a,imor league in Alaska??

to a minor league rather!

You forgot to mention the Carling Cup...

True Skuds, but how much misery could I take!