The non-existent war on Christmas

About ten days ago the Standard ran a report on a campaign to save Christmas from pc interference. This story related to the Christian Muslim Forum and a letter it wrote to councils pleading for an end to the suppression of Christmas and the restoration of its Christian meaning. Needless to say the report cites Birmingham’s Winterval festival and Luton’s Luminos celebration as proof positive that local authorities are acting to stamp out Christmas.

This sort of story abounds, particularly in the toilet press (which includes for this purpose the Mail and the even nastier Express). The problem is that stories about councils etc declaring a PC war on Christmas are pretty much a pack of lies The Guardian had an interesting story on this phoney war yesterday

Christmas obviously banned in Luton
The truth of course is that Luton Council does not have a festival called Luminos instead of Christmas – in November 2001 it held a Harry Potter themed weekend called Luminos but it then had its usual Christmas celebrations. As for Birmingham the truth is that it did run a Winterval festival in 1997 and 1998 but as a promotional campaign to drive business into Birmingham's newly regenerated town centre. Much to the chagrin of the press (if it could be bothered to check its facts) Birmingham still had its Christmas lights, Christmas trees and carol-singing. 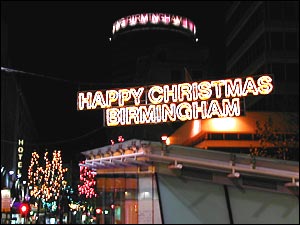 Birmingham declares war on Chrismas
That is not to say that some stories do not have a grain of truth: a member of staff at a High Wycombe library did refuse to display an A4 poster for a carol service in 2003 because of a rule excluding religious or political posters from a notice board but this seems very much the exception than the rule.

As far as I am concerned the War on Christmas stories are largely the product of a lazy and mendacious press. They are no different to the old “loony left council” stories about banned nursery rhymes and more seasonal that lies about the EU.


war on Christmas
Posted by jams o donnell at 9:21 am

Way back in the 1980s I worked on a youth project run by Sheffield City Council.

One year we had a small group of young Muslim women. There was concern that they might feel a bit alienated or excluded by all the Christmas razzmatazz.

We needn't have worried - They joined in and had a whale of time! The only difference was that the cards they made contained the message "Happy Birthday Jesus" instead of "Happy Christmas".

LOL then again Jesus is majorly revered in Islam so the idea of celebrating his birth ought not raise hackles..

These stories are an awful lot of very little

No war on Crimbo here as well

what are you getting at?

That council staff must be under some daily hate campaign?

I think christmas is a dying breed....as for council stories....have you heard about the 'one' that divorced his wife in order to become a gay?.....It was the daily hates page 2! LOL

THat is one humungous Santa Will!


I suppose the moral of this tale is the sheer bullshit sputed by the toilet press. The press prints gross distortions and people genuinely belive Birmingham etc have banned xmas. Christmas seems to be alive and well here Mullet

Oh no! My secret plot to destroy Christmas... so secret that even I didn't know about it until this very moment... has been revealed!

Does our Bill O'Reilly count as "toilet press"?

Ah so your name is Steve Grinch Bates? We're on to you now!

I've got to admit I have heard the name Bill O Reilly but I know little about him. It looks like he is a dickhead though...

Dickhead is too kind a word for O'Reilly, one of the most persistently offensive right-wing-nuts on the air. I mentioned him because he is one of the most aggressive spreaders of the "war on Christmas" meme. (He spreads other things, too.) His most famous gaffe came not on the air but in the course of sexually harassing a woman colleague: in preparation for filing charges against him, she taped a phone conversation in which O'Reilly said he wanted to bathe with her and scrub her with a... well, he apparently meant to say "loofah," but instead he said "falafel." That sounds both messy and kinky to me. Good old Falafel Bill; what would we do without him!

scrubbed witha felafel? I pitta the poor girl to have that happen to her. Seriously he sounds like an utter twat