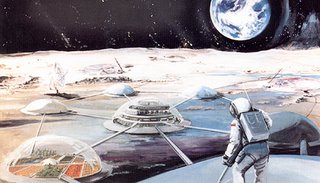 I know this has been extensively reported and extensively blogged but the story that NASA has plans to set up a permanent human settlement on the moon by 2024 is could not be passed by.

The chosen site will be at or near one of the moon's poles, probably the South Pole, because of the long periods of sunlight those regions enjoy. That would permit solar power generation, and the production of electricity, in keeping with NASA’s aim of "living off the land". The South Pole has a special attraction: the suspected nearby presence of key elements, most notably helium-3, a lighter form of the gas that can be used for nuclear power. There have also been some signs that deep craters could contain ice, which would provide water and fuel.

The rockets and landing capsules - the Ares I and Orion programmes will be exclusively American, but the agency wants to bring in other countries. The key question, unanswered by NASA officials this week, is how much the base might cost. Unofficial estimates put the price tag at around $100bn (£50.8bn), compared with NASA’s present annual budget of $18bn.

NASA claims the end of the Shuttle programme in 2010, and the winding-down of the space station, mean that the lunar base can be funded within existing budget ceilings. But critics dispute that, arguing that less high-profile but highly valuable scientific programmes will have to be scaled back, if the agency is to avoid going cap in hand to Congress for extra money.

The programme appears to have broad support on Capitol Hill, even with Democrats in charge from next month. The hope is that the public interest in space will be rekindled by the prospect of men actually living on the moon.

I know it is expensive but I would dearly love to see the plan become a reality. I only hope that NASA does not look back to Space 1999 for ideas.

NASA Moon base
Posted by jams o donnell at 8:29 am

Do you suppose the Moon base will be staffed by women who look like this?

except- there is a strong possibility that it is a military strategy. and-- does this mean america owns the moon? i am a bit cynical- ok a lot cynical- about anything my 'government' suggests these days. they do not have anyone's best interests in mind but their own. there is a reason that they are suggesting a moon base and it isn't an altruistic or scientific one.

Poor man on the moon, the radicals will know whom to defend next time. Freedom for the Moonlanders, (or mooners?), down the rest.

I know it may look silly to send u a mail instead of leaving a comment. Im a friend of Elahe, the painter from Iran, she told me about u and gave ur blog add. I always love to find good friends whom I can share the unberable lightness of being with, therefore I used this upportunity to contact you. I have lots to say about ur blog. so wait for u

I'm ready to volunteer to colonize the moon, jams! I got my moon boots, moon pies, Moon Unit Zappa poster, and I like to moon people. I'm a perfect candidate!

I'm conflicted about this project even though NASA is here in Houston. I know that we have many advancements in our society thanks to the space program, but I'm not sure this is the right time for such an undertaking.

Hmm, EWL> moonburgers? Not very nice. EWL< what are you going to do with Melody? martians are not prepared for such a shock, your little daughter attacking mooners. Not fair, she seems a very dangerous young lady.

If only Roger! Ah I used to have a SHADO interceptor. On the other hand it hasn't aged very well, but how many sci fi shows do?

I know what you mean Betmo, the militarisation of space is something I do not relish (a major understatement!). This is the six year old who watched the first moon landing in wonder talking.. I hope the Moon is used for peaceful purposes

Shery welcome to the Poor Mouth. I hope you find it interesting. Any friend of Elahe is welcome here!

Ah Red, I say let's go for the RED PLANET MARS!, but I say the Mooners should overthrow any attempt by evil capitalists to dominate them!!!

You should be a prime candidate for an Astronaut, EWBL, all those credentials must make you at the head of the line! It is a big undertaking. As for returns I fear it would take a lot of exploitation of our satellite's resources to recoup the spend

IS Melody a formidable opponent to Mooners? You have mighty kids, EWBL!

Let's call it something very original, like Moonbase Alpha. We can start to store huge amounts of nuclear waste on the other side.

Absolutely Roman, and then look at the adventures the moon could have!

I'm laughing at redwines comments. It seems she knows the true nature of my (lovable) little beast.

Well if the moon base is near the Moon's south pole one should use the Latin word for south "aust" and call it:

complete with lunar stubbies and larrikins a plenty I hope!

Good for Australia I say, England have been crap.. Then again I am not much of a cricket fan...

I'm going to rent "Moonraker" this weekend to further prepare myself for the lunar mission.

And read the Moon's a balloon too. You cant be too prepared!