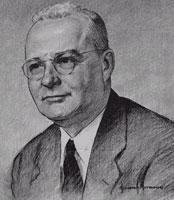 I can thank the wonderful TV show QI for drawing my attention to Thomas Midgely Junior, a great inventor who inadvertently became an environmentalist’s worst nightmare.

In 1916 Midgely joined the Dayton Research Laboratory. A subsidiary of General Motors, the lab marketed a small kerosene engine to drive home lighting systems on farms but it knocked terribly. Midgely guessed that dyeing the fuel red might cause it to absorb more heat and knock less. When he added iodine to the fuel, there was indeed less knock. Midgely then set out to find a better additive and after six years of research he found that tetraethyl lead worked beautifully. He was thus was thus the inventor of leaded petrol.

Midgely took three days to make his second great advance. Early refrigeration units used nasty chemicals like sulfur dioxide and ammonia. Something better was desperately needed so he went back to the periodic table and invented dichloroflouromethane -- the first of the CFCs. While CFCs are not toxic they of course do terrible damage to the ozone layer.

Midgely contracted polio in 1940 at the age of 51. As he lost the use of his legs, he invented a harness to get himself out of bed. On 2 November 1944, he strangled himself in his invention.

There is no moral to this story. Midgely was a great inventor but there is no doubt that his inventions came with a terrible price, even his final one.

Engines of our ingenuity

Thomas Midgely
Posted by jams o donnell at 10:35 am

Fascinating! Maybe if he'd lived longer he would have gone on to invent the 4x4 and easyJet.

LOL Roger! The poor guy could have safely been indicted for the Cock Robin murder.

While Midgely may have been well intentioned but looks like The Grim Reaper is an enviromentalist.

Hmm it would seem so Pete!

I'm glad to see you know "Engines of our Ingenuity." Back in the day when I was a working musician, I occasionally played jobs with John Lienhard's wife, who played violin, and I met the fellow himself a couple of times. I used to go out of my way to be near a radio to hear his tiny segments; now I can hear them any time I like on the web, but I forget. One thing drives out another.

Midgley seems to have been living (and dying) proof of the so-called Law of Unintended Consequences.

I only came across engines when looking for items of Midgely. the transcript is an excelent potted bio. I fully intend to investigate further


I think you have put it nicely, a great description of his life.

That's why I only stick to inventing new recipes. Although it has created toxic gases on many occasions that may have disrupted the delicate balance of the environment.

Hmm ewbl will you go down in history as the creator of the ultimate carminative dish??

Papi says that I'm the dish!

You're smarter than me, jams, and I'm OK with that. I'm wandering off now to look up what carminative means.

I too had got the bug on finding out more about this man from QI (which was odd with the disembodied voice of Davies losing from his chair...).

Poor bloke. Midgely that is...

Nothing erudite ewbl.. it means something that generates farts!

I love QI Lisa and it's not the first time that I have gone scuttling to the internet because of the show.

You really couldn't make Midgely's story up, certainly not his tragic departure

Carminative is now a permanent fixture among the halls of Infidel lexicon. Thanks, jams!

It is a fine word is it not?