A little Komodo lay down its sweet head 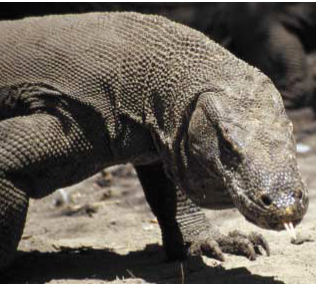 The Komodo Dragon is one of the largest reptiles on the planet. A huge monitor lizard found on a handful of islands in Indonesia its razor-sharp, serrated teeth are so teeming with bacteria that one bite can prove fatal

However, According to today’s Guardian, scientists have discovered that the Komodo dragon can reproduce by parthenogenesis. Dragons at London and Chester zoos have laid eggs without having mated. Four eggs at London zoo have already hatched while anothereight at Chester zoo are due to hatch within weeks.

Although it has been seen in other species of lizards it is the first time that parthenogenesis has been documented in Komodo dragons. "We've ruled out any potential father," said Richard Gibson at the Zoological Society of London, who has been monitoring the progress of the fatherless baby lizards at London zoo. Not that a male could get in with a female without someone noticing, but just to make sure that everyone was completely convinced we DNA fingerprinted everybody and everything." Kevin Buley, Chester zoo's curator of lower vertebrates and invertebrates, added: "We will be on the lookout for shepherds, wise men and an unusually bright star in the sky over Chester zoo."

A captive-bred female called Sungai laid a clutch of 22 eggs at London zoo in 2005; four babies hatched in March this year. Sungai last had contact with a male called Kimaan two and a half years previously. But genetic tests on the offspring ruled Kimaan and all the other males at London zoo out as potential fathers. Now the focus has turned to the eggs of Flora, a female at Chester zoo. Flora has never had any contact with a male. She was brought to the zoo aged around one year and females do not reach sexual maturity until four or five.

Flora laid a clutch of 25 in May of which eight eggs still survive. Similar genetic detective work has ruled out the influence of any other male. The tests suggest that instead of having two different sets of chromosomes from a mother and father, the offspring have two identical sets of chromosomes, both from their mother. "It's not very clear exactly what happens and we don't know whether it has occurred in the wild. But the fact that it has happened twice in such a short space of time with two unrelated females suggests that it is more common than we think," said Mr Gibson.

Parthenogenesis is common in invertebrates such as wasps, aphids and water fleas but it is rarely found in backboned animals. A handful of reptiles and fish can do it and it has also been found in turkeys.

Komodo Dragon parthenogenesis
Posted by jams o donnell at 10:03 am

There are other reptilian oddities in that some species of turtle can store sperm for years. An American box turtle can mate with a female who then lays fertilized eggs years later.

That doesn't surprise me Beakerkin. Plenty of oddities on this earth

These virgin births have vast Biblical implications. Its about time someone Mary fessed-up about who or what she been mixing with.

elasticwaistbandlady said...
This comment has been removed by a blog administrator.
3:43 pm

I'm not ashamed to admit that Dean Koontz is one of my favorite authors. Years ago he had a book featuring a hermaphrodite who essentially impregnated herself and delivered spawn of varying oddities. I read that book 16 years ago and it really captured my imagination. The komodo dragons should be featured in the video for the Pussycat Doll's new song, I Don't Need A Man!

Crap, now I'll be thinking of that song for the rest of the day

I've never read anything by Koontz but I used to be partial to Stephen King (who put me off visiting Maine forever!) before he went off the boil. Gah are teh Pussycat Dolls talentless or what? or is the point to leer at them and forget they are lousy singers?

While I would never buy one of their CD's, and I abhor their indecent exposure and constant writhing around, I find some of their music catchy. I mockingly shake around to it at night but then I hate myself in the morning. :(

I get the feeling that the songs are just a means of getting writhing girls on our screens.. A worthy endeavour with teenage boys in mind I'm sure but it falls a little flat for me!

There was an interesting discussion, but up to now no one mentioned the possible grave repercussions for the human males.

In many respects we are pretty superfluous Snoopy.. genetic manipulation can do away with our genetic cntributin, a rabbit fills in the gap....

I'm sorry to say I can't help you. I'm sure the info is available on the internet somewhere