Ahmadinejad in the doghouse... 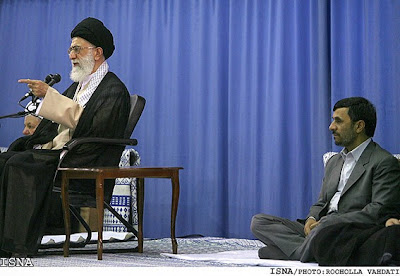 Ahmadinejad had chosen Esfandiar Rahim Mashaie as his first vice president, a job with even less power than his own but who does head cabinet meetings in Ahmadinejad’s absence. Mashai, who has been on record as saying “No nation in the world is our enemy, Iran is a friend of the nation in the United States and in Israel, and this is an honor. We view the American nation as one with the greatest nations of the world”. was not a popular choice for this role (heaven forfend that a senior position is not filled by a gimlet eyed anti-semite). It took Ahmadinejad a week to bow to pressure and dismiss him.

The head of the armed forces and an influential member of parliament questioned why it had taken Ahmadinejad so long to heed the supreme leader's instruction. "The Iranian nation didn't expect the ink on the leader's letter to dry out while it was not yet implemented," said Maj. Gen. Seyed Hassan, chairman of the joint chiefs of staff, the semiofficial Mehr

"The expectation from Ahmadinejad was that he would implement the leader's order immediately after receiving his letter on the 18th of July. Mashaie's appointment should have been revoked and annulled, as the leader said," said Alaeddin Boroujerdi, head of the parliament's national security and foreign policy commission, who generally supports Ahmadinejad's policies.

Ahmadinejad, whose daughter is married to Mashaie’s son (this probably explains a lot) didn not respond to a Khamaenei edict to sack Mashaie until after it had been read on state television Friday.

Even so it seems that Ahmadinejad is still being at least a little defiant (like the lap dog that takes a shit on its owner’s lap?). According to CNN he has appointed Mashaie as his adviser and head of his bureau (presumably his chef de cabinet), a move that is likely to cause further anger among his supporters.

Hmm... Perhaps Ahmadinejad is up for six of the best off Khamenei and being forced to write “I must not employ a philosemite” a hundred times.
Posted by jams o donnell at 2:42 pm

Anonymous said...
This comment has been removed by a blog administrator.
6:28 pm

Anonymous said...
This comment has been removed by a blog administrator.
6:29 pm

Again I come here for my Iran news.

A bit less that last month James but watch this space!

Interesting, isn't it, Jams?
Given Mashaie said, what he's said to be said it's interesting that a) Ahmadinejad would allow his daughter to marry such a traitor's son and b) that he would offer him such a job.

Thank you for keeping us up-to-date on the Iranian situation. It's very helpful.

Yeah. Being inconsequential must hurt. Being crazy as a loon usually doesn't.