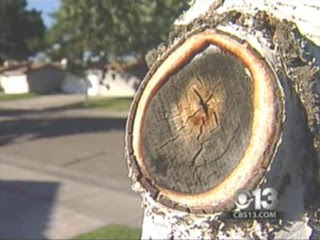 CBS reports that a Stockton family are claiming that an image of Michael Jackson appeared on his tree stump on the day he died.

Felix Garcia had never previously noticed any image in the birch tree stump in his front garden.

A neighbour gave a possible reason why the pop Peter Pan would choose to appear in Stockton "Because Michael Jackson was an icon to us," said one neighbor. "To Stockton, Michael Jackson meant more to us than Jesus, to some people. I think they're both about even."

And Jackson did visit the city 20 years ago, following a fatal school shooting.

Both readers of this blog will know I love a good simulacrum or even an outrageously bad one. Sadly, this one is just crap.

My thanks to FeeFiFoto for the link
Posted by jams o donnell at 7:32 pm

Thanks for the link. Do you see MJ? I don't.

Sadly not. Not even close!

Are you sure it isn't the Virgin Mary? She's partial to appearing in tree stumps, apparently...

Indeed but is good to see a different drummer, even if it is shite!

Looks more like Bubbles the chimp to me, than Jacko.

I'm sure half the treestumps in the world resemble Jackson more than this one. People are getting desperate for a sign he is still alive or somehow protecting them from the afterlife and this offers them that. Sadly these people are deluded.

They must have been having a slow news day ;-)

There is a lot of delusion about. I really can't see Michael Jackson as a guardian angel!


It must have been pedestrian Cherie!

No it really is shite Liz!

Haha A very good one to see Michael Jackson in that stump!

Let's give it a chance. With time it may change yet into something recognizable - like JFK. Or J. Edgar Hoover. Whatever.