Srebrenica victims buried, sometimes one fragment at a time 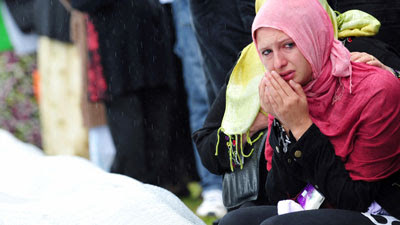 Today’s Independent poses a question: How many times can you bury your child without going mad? This is a question that we are unlikely to face but it IS a question that faces hundreds of Bosnian mothers. As researchers identify remains scattered around mass graves from the Srebrenica massacre, what would your choice be? Bury the first few bones or wait potentially years for a skeleton to come together?

Many choose to bury whatever fragments turn up. If another bone is found then they reopen the grave. Perhaps months later another piece is found, and then another – and each time, the women say, it feels like another funeral.

International Commission on Missing Persons (ICMP) is undertaking the enormous task of identifying the remains of over 8,100 men and boys who were murdered by Bosnian Serb forces when they overran a United Nations-protected enclave in 1995.
Newly identified Srebrenica remains are buried at a memorial centre each year on the 11 July anniversary of the start of the 1995 massacre, Yesterday, the partial remains of 534 victims were buried.

The ICMP was established in 1996. It has collected over 87,000 blood samples from relatives of the missing. The DNA profiles of the relatives are compared with profiles extracted from the bone samples of exhumed victims. So far investigators have helped to identify 12,518 individuals in Bosnia. Out of those, 6,185 are Srebrenica victims. The agency also helped to identify victims of the 11 September 2001 attacks and the remains of those who died in the 2004 Asian tsunami. But Bosnia remains its biggest operation.

Ten years after a DNA lab took a drop of blood from Habiba Masic, researchers called her to say they had made a positive identification. The man at the lab said they had found 90 per cent of her husband's body. His bones had been dispersed among four different mass graves. "And the children?" she recalled asking. "The man went silent, and I knew something was wrong." She was told there was no trace of one of her boys but a small part of the other had been found. The problem was DNA analysis could not determine which one he was. "I couldn't breathe," she said. "I couldn't speak." Now, she cannot bury the precious fragment, for what would the gravestone say: Sadem Masic, 1976-95? Or Sadmir Masic, 1977-95? "Brother is now waiting for brother," she said.

General Mladic, indicted for genocide, is still in hiding, apparently in Serbia. Recently, television channels aired videos confiscated by Serbian police in one of his hideouts. They showed him dancing, singing at parties and cuddling his grandchild. "Mladic is holding his granddaughter in his arm at a birthday party. And how do we feel?" Habiba Masic said bitterly.

It is hard to imagine anybody would envy Madame Masic, but Rufeida Buhic, 68, does. Her husband was killed early in the war. Serbs caught her only son, Razim, 17, when he tried to escape from Potocari. Mrs Buhic returned to her pre-war home near Srebrenica to be where the three had lived together. "That's where they walked, where they worked. That's where I want to walk," she said.

Mrs Buhic can't sleep at night. No medication helps. Often she visits a neighbour's house, where her son's friend lived and where Razim once measured how tall he grew. She goes there just to look at the line carved in the wood of the doorway: 195 centimetres, or nearly 6ft 5ins. Constantly, she checks her mobile phone."Every time it rings, I think they are calling me to say they found him... even one bone," she said.

There is no comment I can add to this that can come close to expressing my sorrow for these women.
Posted by jams o donnell at 1:22 pm

A friend of mine had the unenviable task of exhuming the mass graves for forensic evidence/identification.

My God that must have been grim Cherie

He couldn't say too much for professional reasons, but on a personal level he struggled with it too. It did affect him.

The inhumanity on all sides in that Balkans issue is generally acknowledged now to have been exacerbated by the interference of the western political forces for their own ends.

As always, the result is mothers mourning their dead childeren.

It must have taken a lot out of him Cherie

Th end is the same whatever the cause James.