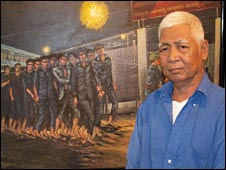 Vann Nath, Tuol Sleng survior, now one of Cambodia's foremost artists.
The trial of Kaing Guek Eav (aka comrade Duch) the commandert of the Khmer Rouge murder centre Toul Sleng or S21 is underway in Cambodia (which apparently and appropriately means Hill of poisonous trees in Khmer). On Monday there were numerous reports of the testimony of Vann Nath, one of the seven people believed to have survived imprisonment inside that evil place.

Vann Nath described how hunger had driven him to eat insects, and said he had also eaten the food beside corpses of starved fellow prisoners. "The conditions were so inhumane and the food was so little," he told the tribunal, as he broke down in tears. "I even thought eating human flesh would be a good meal."

He said he was fed twice a day, but each meal only consisted of three teaspoons of rice porridge. "We were so hungry, we would eat insects that dropped from the ceiling," he said. "We ate our meals next to dead bodies, and we didn't care because we were like animals."

He described how prisoners were kept shackled - 20 or 30 of them together - and ordered not to speak or move.

Vann Nath survived due to his skills as a painter. He was forced to produce portraits of Khmer Rouge leaders - on pain of death. "I thought that if I could do good pictures and they were satisfied with what I painted, they would be happy and I would survive,"

Van Nath's portraits passed muster - and he has since become one of Cambodia's most famous artists, and his work often depicts scenes from Tuol Sleng.

Comrade Duch has admitted responsibility for his role as governor of the jail, and begged forgiveness from his victims. At least his long overdue punishment, when it comes, will have some meaning.
Posted by jams o donnell at 7:45 pm

Maybe some of his European pals should be in the dock with him...

Which ones do you refer to Mutley?

I have visited the S21 place. It is not something one forgets. And Comrade Duch is just one of many thousands like him still walking around Cambodia.

I shudder to think what Tuol Sleng is like in real life Snoopy. Sadly most Khmer Rouge butchers will go unpunished

The sixties lefty scum who stoked the Khmer Rouges murderous fantasies - most are thankfully dead of course...

Interestingly Mutley there was a British supporter of the Khmer Rouge who went on a delegation to interview Pol Pot. The Khmer Rouge killed him for his pains....

Jams, reading is believing. I mean i knew vaguely about it to to hear this man's raw testimony... it is shocking. This is horrible to think such a place existed.