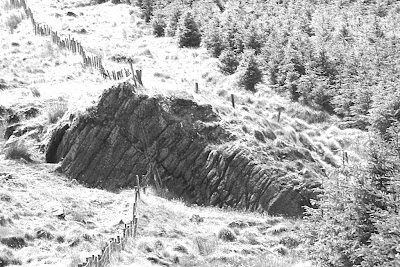 The theme for this week's Photo Hunt is rock so here is a photo of a rock! This rock, which is in the Millstreet Country Park, Co Cork, Ireland, was the site of a Hedge School. During the 18th Century catholic schools were banned in Ireland so many catholic pupils were given lesons in clandestine locations (more often indoors than outdoors, despite the name) The schools died out in the 19th century with the introduction of primary (elementary, national) schools.. 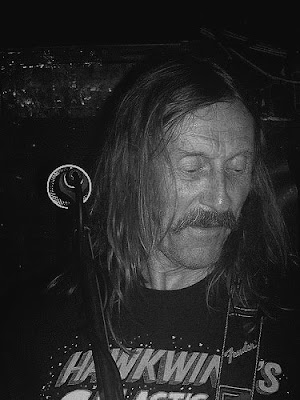 Here's Dave Brock, a founder member of my favourite band Hawkwind. He is the only person from the original line up still with the band 40 years on (in August)

Here is Hawkwind with one of their poppier songs Quark, Strangeness and Charm (which, like the Dave Brock photo, I have posted before). The singer is Robert Calvert who, sadly died in 1988, but still serves nobly as my Avatar

That's a great photo of a great rock in County Cork. It makes you want to inspect for what? A face, I don't know why. Like a giant head left behind on a battlefield.

Mr Brock on the other hand has a well worn face chiselled by hard living and???

Happy weekend Jams. Am I the first?

Love that first pic, and the explanation of the schools. I had not known that before. Also nice thinking out side of the box so to speak with the second. I'm going to check out the video clip now. :) Happy weekend!

Very informative Jams. Now I know about your country. :)

Great takes, both of them. Thanks for the intro to Hedge Schools and Hawkwind.

That's a wonderful shot of the rock in Ireland and interesting about the school. I couldn't get the youtube video to work but I'll try later. Happy weekend.

Thanks everyone, JMB Brock is now 67 but there was a ot of hard living and lots of "and"!

Beautiful nature shot!
I didn't know about the churches. Interesting piece of history!

And what a wonderful portrait of an interesting person. Well done :D!

Beautiful take on the theme, on both photos.

Great shots and take of this theme Jams!

And.. my spandex's is safe in my closet!

Have a great weekend!
Anna

that's one huge rock (top photo). in my head a rock is just something you can hold in your hand or fist. but then again, my own post defies my own stereotype. or maybe not.

your posts- regardless of the theme- they always rock hehe (poor attempt at pun, i know! but i say that with all sincerity still =] )

ps- why were catholic schools banned in ireland?

I love the shot of the rock. Great takes on the theme.Interesting about the Catholic schools history, thanks for sharing.

What a great photo!!Nice of you to share some history as well.

This is so interesting, the bit about Ireland and schools in the past. I surprised myself by liking the music group too :)

what an interesting history and a great band. happy PH!

Interesting info re the "hedge" schools. And d'oh, had fixated so much on physical objects that I forgot that there's also a genre of music known as rock! :D

Now! I know who's on your avatar :P

Love both of your "rocks" - and the lessons in history & culture!:-)

I wondered if anyone was going to go with "rock" as in rockband. :)

Good choices for the theme today. I love the texture of the portrait. Cool.

excellent choice - I knew of the Hedge Schools but didn't realise they would be out in the open like that.

Clearly your dad is a rock star too. Love that first shot.

I loved the history today Jams! And, I thought of rock bands too, but couldn't come up with anything but a CD....so, I didn't do it.

My rocks are now posted. Won't you try to stop by to view my photos today? Have a great weekend.

I wouldn't have minded going to school there.

great take on this week's theme.

mine is up too.

The first shot is wonderful and the backstory very interesting. Love the second one... Rock on! The video is great - the band has definite strangeness and charm.

Good thinking on both takes on this theme. Cool.

Both solutions are great.
I suspect you do not have an old rocking chair;-))

We've got kittens - on my second blog:
http://toraamusic.blogspot.com/2009/07/felicia-her-first-birth-felicia-is-cat.html

That's a beautiful rock...I would have loved to see this in color.

the chiseled rock and face of the rocker blends ha ha

it is interesting to learn about the story behind such landmarks.

It is wonderful to learn new things when visiting various blogs. I didn't know that about the schools. Thanks for sharing. That's a great photo.

Age is a bugger.

Thanks everyone. It is a bugger indeed James!

Interesting takes, both of them.

First I've seen (so far) to use rock music.

How interesting about the schools !
Don't know Dave Brock but he looks like an ancient Hippie ! (My generation, lol )

Very interesting post, Jams. Makes me wish I had posted some of my "rocker" photos, too. *sigh* next time! Thanks for stopping by. Hope your are having a wonderful weekend. Be blessed.

Gattina Dave Brock most definitely ois of that generation!

What a beautiful landscape with the rock (granite?) gently rising from the rolling hillside. Intersting tour ~ both facets!

I like this post Jams. I wondered if you'd give a slightly different interpretation, and you didn't disappoint!

Good Idea with the Music. Rock :-) I also love Rock Music, not only but the last time the most.

Great Hunt, and always new informations for me. Like to read your blog.

Have a great weekend,
Tina

I was also one for Hawkwind, seeing them many times in the 1970s. But my favourites were the Pink Fairies!

TEFL Tradesman I was too young for teh early 70s Hawkwind. Never saw Pink Fairies either but I do have several albums which are great!

thanks for your visit

I love the shot of the hedge school site. I'm fascinated by the way the fence carefully goes over the top rather than take the easy route round the edge. Your second is the only alternative version of rock I've seen so far! I thought there's be more.

That is one interesting rock. Have a great weekend.

Great take on this week's theme.

Interesting take on the dual meanings of rock!

I did not know that particular history about schools in Ireland, including Catholic schools being banned in the 18th century.