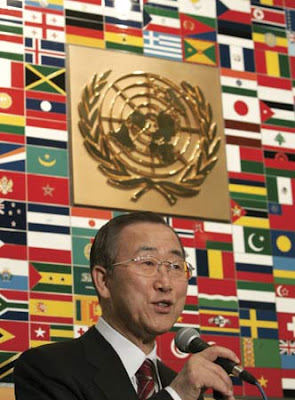 The Sydney Morning Herald published an extract of a public speech by UN General Secretary Ban Ki-Moon (above) that outlines his vision for a democratic Burma.

Ban told an audience of diplomats, UN agencies and non-governmental organisations at the Drug Elimination Museum in Rangoon that the military regime must free the Aung San Suu Kyi and introduce other reforms for the good of the country's people.

"I am here today to say: Myanmar, you are not alone. We want to work with you for a united, peaceful, prosperous, democratic and modern Myanmar. We want to help you rise from poverty ... work with you so that your country can take its place as a respected and responsible member of the international community, but let me emphasise: neither peace nor development can thrive without democracy and respect for human rights. Myanmar is no exception." 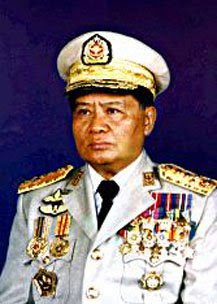 Than Shwe, brutal thug
Junta chief Than Shwe (above) earlier Saturday refused to let Ban visit Aung San Suu Kyi, who is in prison facing trial over an incident in which an American man swam uninvited to her lakeside house in May. Ban Than Shwe's snub as "deeply disappointing" and said in his speech that all political prisoners, including Aung San Suu Kyi, "should be released without delay".

Ban also urged the junta to ensure that elections promised in 2010 should be free and fair. Critics say they will be a sham that will allow the ruling generals to entrench their power."The upcoming election, the first in 20 years, must be inclusive, participatory and transparent if it is to be credible,"

I agree whole heartedly with the words and the sentiments of the General Secretary. Sadly I cannot imagine them cutting any ice with the brutal thugs that run Burma. A case of fine words falling on deaf ears, sadly. There’s a fat chance of the junta giving up the levers of control... Prising the levers out of their cold, dead hands is a thought though
Posted by jams o donnell at 9:09 pm

I hope that the American who caused this latest setback to her freedom feels duly chastened... What an idiot!

To blame her for the actions of an idiot, especially when she reportedly told him to leave immediately, is appalling. Of course, the junta will use every excuse to corner her.

It was a stupid thing to do. For the Burmese junta it's a god send that they wiill use to prevent her standing in next year's election

He was refused permission to speak with the lady herself. Pointless exercise with those thugs.

It was a wasted effort with those scumbags

Deaf ears - surely - imagine the din created by all this medals each time this bloke Than Shwe farts. Which he does a lot, I guess.