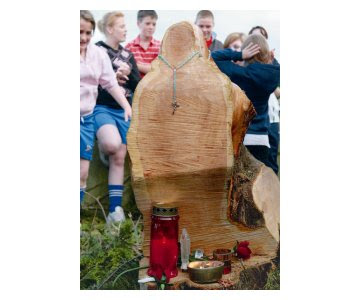 Ah there’s nothing like reporting on a good simulacrum story be it a nun in a bun or Alahu Akbar spelled out in the seeds of an aubergine, So here’s one from Ireland.

The Irish Times reports that almost 2,000 people have signed a petition seeking to prevent the removal of a tree stump on the grounds of a Co Limerick church. The stump is said to depict the Blessed Virgin Mary.

People from the town organised the petition in an effort to have the stump, which was due to be dug out of the ground yesterday (Wednesday 8 July) , made into a permanent fixture at the church. “We have almost 2,000 signatures on the petition already and we are going to continue getting more,” said shopkeeper Séamus Hogan.

“People have been coming from Kerry and Clare to see this tree, which we believe shows a clear outline of Our Lady,” he continued. Mr Hogan said the discovery was bringing people from all walks of life to Rathkeale to pray.It’s doing no harm and it’s bringing people together from young and old to black and white, Protestant and Catholic, to say a few prayers, so what’s wrong with that? There’s enough violence and intolerance going on in the world,” he said.

Local parish priest Fr Willie Russell said on a Limerick radio station that people should not worship the tree. “There’s nothing there . . . it’s just a tree . . . you can’t worship a tree.” Meanwhile a spokesman for the Limerick diocesan office said the “church’s response to phenomena of this type is one of great scepticism

Well I’m convinced. Those rosary beads around the neck are a dead giveaway
Posted by jams o donnell at 8:28 pm

And it proves that you have good eyesight! I wonder if Mary is laughing...

I can imagine that she would be amused!

This must be a bizarre publicity stunt cooked up by the local Chamber of Commerce. At least, I hope so...

Sorry, I'm missing this. My eyesight must be not up to par and after my op to get bionic eyes.

Ah jmb you miss very little! This must be one of the crappest simulacra ever!

I reckon if you sling a rosary around something and have enough Jamesons in you that anything looks like a Virgin Mary.

I think we should take it seriously. If Jonah could survive in the guts of a fish for three days, it is certainly possible that this is a miracle.

I would have though a miraculous appearance would show a little more details MAALIE!

It is good to see people with a creative imagination, even if that group clearly includes the town's tourism/publicity team. I don't see Mary myself; I'm not sure if my eyes are too old, too faded or too jaded by repeated exposure to alleged religious objects...

You eyes are not jaded Steve, there is just sod all detail!

Well, if it brings a few more tourists... I have a tree stump in my yard too, have to take another look then.

You could have a money spinner there Snoopy!

Click here to see a video about a family that has suddenly discovered an image of Michael Jackson on a tree stump in their yard. How miraculous!

That's brilliant. I am going to blog this!