A few months ago I posted a few items regarding Connor Casby and his satirical portraits of BIFFO - not the Beano bear but the Big Ignorant Fucker From Offaly as the Taoiseach Brian Cowan is less that fondly known (see here, here and here). 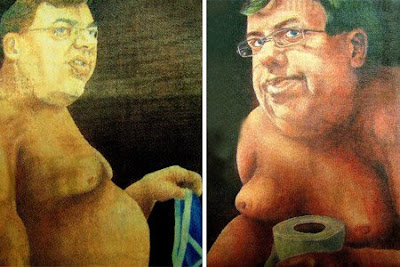 Mr Casby faced the annoyance of BIFFO and his humourless Fianna Fail cohorts (He is never called the Big Happy Fellow From Offaly) but it was as nothing compared to wrath faced by a Russian artist last month:

A Russian artist was arrested by the secret service after depicting prime minister Vladimir Putin as a woman. Alexander Shednov (also known as Shurik) portrayed the Vladimir Putain in a tight, low-cut dress with long hair and large hoop earrings. The image was a protest against Poontang in trying to return to the Kremlin for a third presidential term. 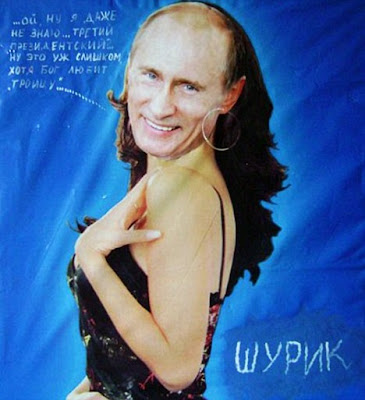 The artist had attempted to beam the portrait onto the main administrative building in Voronezh, his home city, on Russian Independence Day last Friday. But Shednov's artistic statement did not go down well with the FSB, the Russian state intelligence agency.

He was arrested and, according to claims, he was questioned for seven hours and beaten. Friends said his flat had also been searched and some of his paintings removed. Shednov faces a court charge of inappropriate behaviour.

Personally I think Putain looks good in a dress but the earrings make him look cheap and tarty. 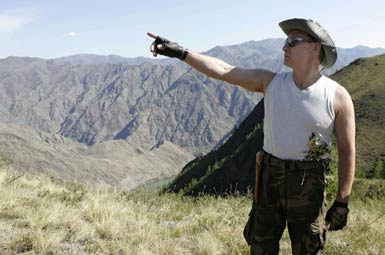 There is a lot of nonsense about Putin being an ultra-manly macho man. Personally I think his publicity photos hint of something a little more flamboyant lurking just beneath the surface...
Posted by jams o donnell at 8:52 pm

The only charge against the painter could be force-feeding emetic to the viewers, but its' hardly secrete service bailiwick.

Well, it's nice to know that nothing changes in Mother Russia...

It looks like a case of plus ca change Snoopy. I forget that you hail originally from Russia