The World Under-23 Rowing Championships last week provided a well deserved chance to hear the Iranian national anthem after Mohsen Shadi Naghadeh won the Lightweight Men’s Single Sculls event. His victory was a first for an Iranian rower at any world or Olympic rowing final. World Rowing has a photo of him (below) with silver medallist, Brazilian Ailson Silva and Linus Lichtschlag of Germany who won the bronze. 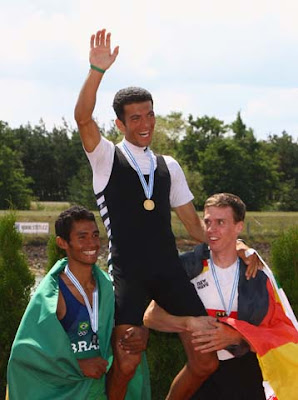 Press TV reports Mohsen’s win but it would seem that by the time it was reported in Iran his hand and upper arm were removed from the photo. 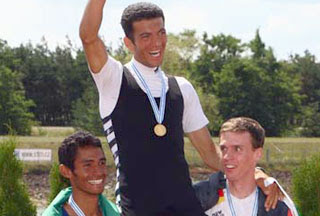 Now I wonder if it had anything to do with him sporting a certain green wristband thingumybob of the sort that caused a number of Iranian footballers so much grief last month...

I look forward to seeing Mohsen competing at Eton in three years time (the site of 2012 Olympic rowing regatta) unless of course the Iranian authorities don’t do more than crop his photo....
Posted by jams o donnell at 3:39 pm

Ooo yes. I remember that now you mention it.......I am so out of the loop at the moment but little gems still manage to penetrate the chaos.
Cheers

I'm out of the loop on a lot of things too Maddy!

"Now I wonder if it had anything to do with him sporting a certain green wristband thingumybob of the sort that caused a number of Iranian footballers so much grief last month..."

No. Surely it was just a cropping issue or a size adjustment for the paper or what have you...

I guess some regimes just don't want to report the good news in full light or bad news in any light.

... Gosh ... and those naked thighs. Shocking!
Sometimes journalists just have to protect their readers. Certain ayatollahs could get mightily aroused ...

I;m sure the Press couldn't not report Mohsen's fine achievement Poetryman.. Still no point highlighting that he may not be 100% behind the regime!

Are yu suggesting that they might be ahem, "interested" in that llithe muscular body, especially when naked and oiled? You are a Blasphemer Sean!!!

at first i thought they actually removed the hand and upper arm .. horrors :)

Mercifully they only cropped the photo Bengbeng!