Rafsanjani, prayers and protests in Tehran 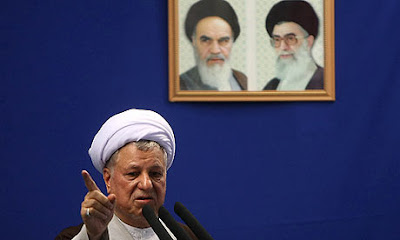 Hashemi Rafsanjani, a former president of Iran and one of the nation’s most prominent clerics has finally criticised the Iranian government for its for its handling of the protests that followed the disputed presidential election

The Guardian reported that Rafsanjani criticised the arrest and detention of protesters, and attacked the lack of freedom of expression. He expressed sympathy for the families of dead protesters, and ended his remarks by saying: "I hope this sermon will pave a way out of this current situation. A situation that can be considered a crisis."

During Rafsanjani's sermon the crowd inside the hall in Tehran University could be heard via state radio chanting, "Mousavi, Mousavi, we support you and "azadi, azadi" — Persian for "freedom"

Basiji militiamen in front of a line of riot police fired tear gas at thousands of protesters who chanted "death to the dictator" and called on President Mahmoud Ahmadinejad to resign. Young protesters with green bandanas over their mouths and noses set a bonfire in the street and kicked away gas canisters, facing off with the security forces while others scattered.

Before the sermon, police fired tear gas at hundreds of Mousavi backers trying to enter the prayer. When Mahdi Karroubi, another pro-reform candidate in the June election, headed for the prayers, plainclothes hard-line supporters attacked him, shoving him and knocking his turban to the ground, witnesses said. "Death to the opponent of Velayat-e-Faqih," the hard-liners chanted as they attacked him, referring to the supreme leader, the witnesses said.

As she headed for the university, a prominent women's rights activist, Shadi Sadr, was beaten by militiamen, pushed into a car and driven away to an unknown location,

After the prayers, some worshippers joined the protests outside, swelling their numbers to thousands. Members of the hard-line Basij militia charged the crowd, firing tear gas to disperse the crowd, witnesses said.

The protests in Iran are not over, not by a long chalk. So much for them fizzling out quickly as George Galloway so smugly predicted last month
Posted by jams o donnell at 6:16 pm

Studying that Rafsanjani character a bit, I am almost 100% sure that he is just using the subject matter to advance his own internal political interests. A nefarious creature if there ever was one.

Just a little Snoopy. THe contrast between what went on outside and inside the Prayer Hall speaks volumes