They come literally in their millions and yet the mainstream media ignore this story. The country is in the midst of an invasion of African migrants. The immigrants invade our public spaces and take food with no regard for the laws of this land

Mercifully the only people likely to be up in arms are the lepidopterist section of the BNP. The new arrivals are painted lady butterflies and the only resources they will devour are nectar and thistles. (I doubt a member of the Bastard Nazi Party could spell lepidopterist though although they might scream that they are “coming here and stealing our nectar”)

According to a recent article in the Guardian this year’s migration could be the biggest in years. Up to 18,000 were spotted sailing on the breeze across Scolt Head Island on the north Norfolk coast: 50 arriving every minute according to Natural England nature reserve staff.

The mass migration began about 10 days ago when large numbers were seen off Portland Bill in Dorset. Since then thousands of painted ladies have turned up everywhere, from central London to Dumfries and Galloway. 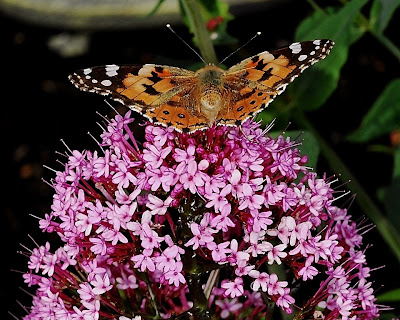 A painted lady in Romford

Painted ladies reach our shores every summer, but the last major migration was in 1996. This year, rumours of an impending invasion began circulating in late winter. Scientist, Constanti Stefanescu, reported seeing hundreds of thousands of them emerging in Morocco in mid-February after heavy winter rains in north Africa triggered the germination of food plants devoured by its caterpillars. Aided by favourable winds large numbers were seen in Spain during April. A few weeks later, they had reached France.

"We've had reasonable migrations before, but nothing this sudden," says Martin Warren, chief executive of Butterfly Conservation. "All the signs are it could be one of the biggest ever."

On the coast, all you may see is a flash of orange whizz past at head height. When they settle on garden flowers they are as striking as their less adventurous relatives, the red admiral and the small tortoiseshell. Certain weeds should be very afraid: painted lady caterpillars feast on thistles before emerging as a new generation of adult butterflies in August.

Come September, the painted ladies will be off again: the British-born generation begin an epic reverse trip back to North Africa.

The photo is one I took in our front garden a couple of days ago. I think it’s a painted lady rather than a native butterfly...

Anonymous said...
This comment has been removed by a blog administrator.
6:35 pm

The photo is beautiful. I thought "This is very un-jamsish!" at the beginning of the post! Love your name for the BNP.

Forgot their name, but there are billons of a butterflies travelling between Canada and Mexico, every year.
An amazing phenomenon.
Even more thankful than for the post (brilliant lead, Jams!) I am for teaching me a new word.

Definitely un-jamsish, Welshcakes! W=My description of the BNP was the mildeest I could think of!

That rings a bell Sean. The sort of thing that makes me glad to be alive.

You're right, Sean. The orange-and-black-winged monarch butterflies breed in Canada during summer and migrate south to Mexico and California for the winter. Billions of them. They return to Canada for the summer. They feed exclusively on milkweed and are highly poisonous, but so beautiful. There is a detailed map of the travel. People go to see them, at different places, during their trip. Wish I would know how to put a link. But it's easy to google.

So that's the name of the butterflies I saw flitting around the lavender yeaterday. Shadows of ecstasy!

Quite a few butterflies are toxic as a result of their diet. THey sound so beautiful.

They are magnificent aren't they Steve!