Virgin Mary on a griddle 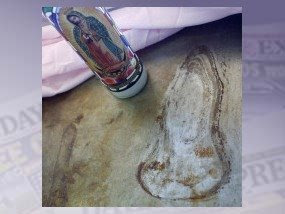 Following on from recent sightings of Jesus in a kit kat and on the derriere of a terrier, the Blessed Virgin Mary has made a recent sighting in Calexico

Apparently people have been flocking to Calexico to view an image of Mary on a griddle. Brenda Martinez, manager of the Las Palmas restaurant, said more than 100 people have cometo gaze at the likeness.

Since the discovery, the griddle has been taken out of service and placed in a shrine in a storage room. Among the awe-struck visitors was a group of masked Mexican wrestlers who arrived for an exhibition. One, known as Mr Tempest, said: "This is amazing. It's a true miracle."

Make of the image what you will. Personally I cannot resist a simulacrum, be it the words of Allah in an aubergine, or Mother Theresa on a cinnamon danish.
Posted by jams o donnell at 7:53 pm

Obviously the image that I see means I have lost the faith again...

With all these miraculous appearances, it's only a matter of time before there's moving statues again here in Ireland (we had a rash of them in the late 80s; coincidentally, we had a really bad recession then too!)

Not yet LB but give it time!

Ah Egg I look forward to the Virgin's reprise at Ballinspittle!!

I ate a steak once that for some reason reminded me of Abba Eban. Still I was too hungry to keep it forever in the freezer.

Hmm Snoopy and you didn't sell the steak? It could have been worth a pretty penny!