Napoleon: from emperor to king of romantic fiction 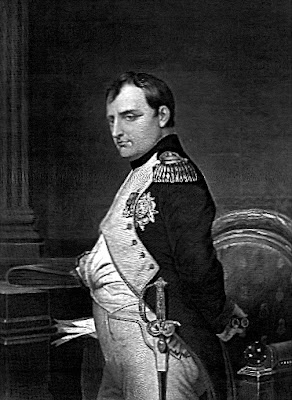 I don’t know whether Napoleon actually did send this urgent message to Josephine: "Will return to Paris tomorrow evening. Don't wash." but it hardly marks him out as a man of romantic parts. I suppose he perferrred her to be drenched in scent.Napoleon himself liked Eau de Cologne and would use gallons a month it could have been an early 19th century version of putting N.O.R.W.I.C.H. on a letter ([K]nickers off and ready when I come home)

Now (according to the Guardian) it seems that the Little Corporal was in fact a failed romantic novelist. "I feel numb. Come to me without delay," may not have quite the same -panting ardour as his famous love letters, but then Napoleon had not yet met his Josephine when he wrote the words. This is from the first English version of the pieced-together fragments of his long lost novella, Clisson and Eugénie, is due out this autumn. It is the unfinished tale of a brilliant young soldier who loves tumultuously, loses, and dies heroically in battle "pierced by a thousand blows"

Napoleon turned to literature when he seemed to have stalled his glorious career and lost his woman. In 1795, after acquiring a reputation for brilliance but he had run aground in the army's topographical office in Paris. He was unofficially engaged to his sister-in-law, the beautiful Bernardine Eugénie Désirée Clary, whose sister married his brother Joseph: her mother reportedly commented bleakly "one Bonaparte is sufficient in the family".

Things turned for the better (for Bonaparte at least) later in the year. In October an army of 30,000 royalists, swelled by the perennially revolting Parisian mob, threatened the republican -government in Paris. With just 5,000 troops, Napoleon turned all the artillery he could seize on the mob – the famous "whiff of grapeshot". It was a rout. Within the month he was promoted to major general, named commandant of the army of the interior, and removed from his clerk's office to a palace overlooking the Place Vendôme. In the same month he met the widow Josephine Beauharnais. The rest is history...

After Napoleon died in exile on St Helena the pages of his novella were scattered as souvenirs, and are now in public and private ¬collections across the world, including Moscow and the United States.

Peter Hicks, a historian at the Fondation Napoleon in Paris, spent years trying to piece together the manuscript . The reconstructed version was ¬published last year in French, and in -October will be published by the London-based publisher Gallic, translated by Hicks and Emily Barthet, with an essay on Napoleon by the author and psychiatrist Armand Cabasson.

Well there you have it (yet again!) Here’s an extract:

"One evening however Eugénie wrote to him: 'I am worried and unhappy. I feel numb. Come to me without delay. Only the sight of you will cure me. Last night I dreamt you were on your deathbed. The life had gone out of your beautiful eyes, your mouth was lifeless, you had lost all your colour. I threw myself on your body: it was icy cold. I wanted to bring you back to life with my breath, to bring you warmth and life. But you could no longer hear me. You no longer knew me.”

I certainly feel a purchase coming on! Interestingly if you would like to try Napoleon's favourite scent, Farina Gegenuber still produces it. It is actually quite a pleasant smell and can be found at a very reasonable price on ebay
Posted by jams o donnell at 12:55 pm

Apparently, one page was sold $35,400, recently, at an auction. Considering all the Napoleonic Wars, don't you wish that he would have continued to write lousy novels instead of becoming one of the best military leaders of all times? France, and the world, would have been much better without Napoléon 1er. My opinion...

WOw that is a lot of money but perhaps no surprise Claudia. I wonder what things would have been like if Napoleon had not existed or had stayed an obscure officer.

"I feel numb. Come to me without delay."

Is there one of them double entendres somewhere in that text or am I still under the impression of that Viagra post of yours?

Haha I get the feeling that power was enough of an aphrodisiac!