The theme for this week's Photohunt is in memoriam. I still have not had the chance to head off out to take new photographs (except in the garden) so here are some reposted photos of gravestones in Hornchurch. There will be a lot of wordage as these gravestones do deserve to have the back story told. 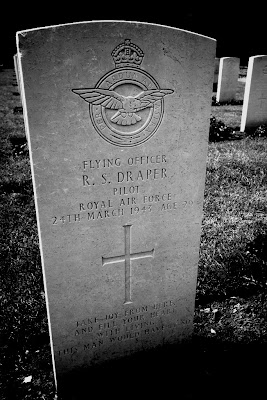 This is the grave of Raimund Sanders Draper was born in 1914 to a wealthy American family (interesting his was the nephew of Anglo-American comedienne Joyce Grenfell). While the USA was still neutral he came to the UK to join the Royal Air Force and was commissioned as an Officer in September 1941. After serving in various locations as a fighter pilot his squadron moved to RAF Hornchurch in March 1943 ( RAF Hornchurch was an important fighter station. Its squadrons had fought with distinction during the Battle of Britain).

On 26 March Sanders Draper took off from RAF Hornchurch. Whilst approaching the the nearby Suttons school his engine failed. He had the decision of baling out and to let the aircraft hit the school or to save the school by staying with the stricken aircraft . He chose the latter but he was killed in the ensuing crash and explosion. In the early 1970s Suttons School was renamed Sanders Draper who gave his life to save the lives of others. 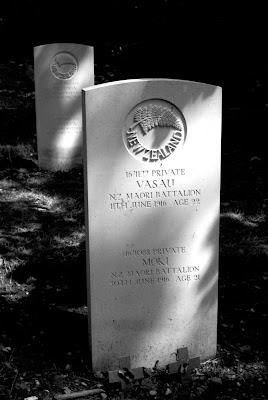 These are the graves of four men from the Pacific island of Niue who died in hospital in Hornchurch during WWI. This is their story. It is based on an article written by Margaret Pointer in the New Zealand Herald.

The military parade in Auckland's Queen on February 4, 1916 was unusual: among the 1500 men that day were 140 from Niue. The men were part of the 3rd Maori Contingent who were recruited to maintain the Contingent which had suffered heavily during the Gallipoli campaign the previous year.

Niue had become a New Zealand Protectorate in 1901. When war began in August 1914, the island had a population of around 4000, including 30 Europeans. The Europeans felt the need to make some sort of war effort and they suggested a Niue regiment and arranged the recruitment of men and their drilling on the village greens.


The 140 men brought to New Zealand had never left the island before. Over four months the Niue Islanders underwent training. In February 1916 the Niue Islanders were ready for service and were sent initially to Egypt. but soon the order came to go to Northern France to provide support on the Western Front.

The Niueans were part of a Pioneer Battalion working at night to maintain a network of trenches. They suffered terribly from illness and by late May 1916, 82% of them had been hospitalised. The army authorities made the decision to withdraw the Niueans from Northern France and assemble them at the New Zealand Convalescent Hospital in Hornchurch, England, where they could be cared for before sailing to New Zealand. The people of Hornchurch still tend the graves of the four Niueans who are buried there.
Posted by jams o donnell at 12:01 am

We are thinking the same way today. Your photos are great with the b/w treatment; drives home the point/mood really well.

Awesome shots Jams!
And I love them in b/w!
Great and touching post.

Yeah.. Latin Kings is a rap-group/hip hop-group from Sweden.
So.. Yeah I rather go for Arch Enemy ;)

Have a nice weekend!

Wonderful photos of those stones and thanks for including the poignant back stories too. Hope your leg is contining to heal!

Excellent post, and I too appreciate the stories of the people who these stones memorialize. Hope you have a lovely weekend :)

Great post Jams. I'm glad you included the wordage as it was interesting and a wonderful tribute. Hope you have a happy weekend.

Wonderful shots, and a great post! Perfect for the theme!

Well done - love the feeling of the photos and truly enjoyed learning about these brave souls.

How wonderful that the people of Hornchurch still care for this graves after all those years.
Thanks for the explanation and have a happy weekend Jams.

Your music taste tells me, you were born after WWII.

Very poignant stories. Just watching a story about the reburying of soldiers from Fromelle. Amazing work to bring closure for many families.

What sad tales, albeit well told. I really wish there were fewer wars in the world -- and fewer people thinking there's a need for them.

Excellent choice for the theme. I took a similar thought.

Sad story but I like it. I like looking at gravestones and wonder about the story behind the people buried there.

Interesting story. The photos look classic. Thanks for dropping by. =)

Great photo along with the story.. Happy Weekend!

I am always overcome considering flyers - I might have been one of their number had I been older. I would have volunteered. Enough said.

Capital post, Jams, and thanks for sharing the story.

great shots. mine is up too.

Great shots. I really like that you did these in b/w. Thanks for including the backstories, very interesting.

I didn't know this about Niue. What a dreadful way for these men to experience Europe.

My "In Memory" is posted. Have a great weekend.

Great photos, I see we were thinking along similar lines.

Thanks for sharing these great photos and the stories behind them. I'm touched by the story of the pilot who chose to save the lives of the children in the school.

Beautiful photos and stories to go with them. Great job.

Nice entry for this week and thanks for sharing. TC

I am from Niue, thanks for covering this story about our Niuean soldiers. Sad for the ones who never return especially for those buried in the sea. Every year we commemorate their effort on ANZAC Day. I think it just poor administration that these men were not given proper prior health care, knowing that they are going to be exposed to these types of diseases that the men have no immunity.

Great b/w treatment and I loved the history.

My selection is object which evoked multiple memories and thoughts.

I'm such a sucker graveyards. Thanks for the very informative post.
I love it when the photohunt posts have lots of backstory information.

The B & W version of the photos are very smart. It gives it much more of a gloomy feeling, which is very appropriate....

I have been quite lazy lately when it comes to my camera... I must take it out more often.

Thanks for an interesting story...

Aloha Jams,
An excellent post--cool black & white shots & the history was fantastic too!

Hope you'll stop by & visit my "In memory" http://upcountrysmiles.com

Jams,tnchick sent an email to those she emails a PH reminder about not being able to access her site. She says we have to do PH today without her. It seems we can manage quite well for once. :)

Thanks for the stories behind the headstones. To many men, so many stories...

Jams, this is just beautiful, the photo and the stories! Great job for this weeks theme word! My hunt is up, please come and visit

Wonderful pictures and a great history behind the pictures as well. The old graveyards hold so many stories. Mine is up here.

Great choice for the theme - good photos and some interesting history to go with them.

Beautiful gravestones and nice choice for this week's theme. I hope you are healing on schedule and getting stronger every day.

This is a wonderful post, and I particularly enjoyed the historical essays about the people buried under the stones. There are so many stories, so many heroes. Thank you for honoring them.

thanks for sharing bits of history. i enjoy the photos.

What a story! Very touching.

Great post, and I loved the Joyce Grenfell reference. She used to be a favourite of mine. :)