What caused the original sardonic grin 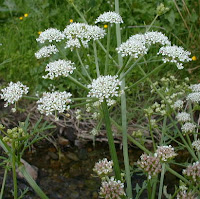 Last week the Telegraph carried this fascinating article regarding the origin of the sardonic grin. I had never given this matter a millisecond of thought and it never even occurred to me that 'sardonic' has its roots in the name Sardinia or that a plant commonly found on the island was used in potions which gave corpses a grimace after death.

Researchers have established that chemical compounds in the plant, tubular water-dropwort (left), cause muscles in the face to contract, producing a strange rictus grin. The plant is known in Latin as Oenanthe crocata but to Sardinians as water celery. It is related to carrots and parsnips but is highly poisonous.

"Our discovery supports what many cultural anthropologists have said about death rituals among the ancient Sardinians," said Mauro Ballero, a botanist from Cagliari University in Sardinia. ..According to ancient historians, elderly people unable to support themselves were intoxicated with the herb and then killed by being dropped from a high rock or by being beaten to death...The facial muscular contraction induced by the sardonic herb mimicked a smile, and the expression risus sardonicus (sardonic smile) to indicate a sinister smile is well documented in the Latin and Greek literature and in most modern European languages."

The discovery may have applications in medicine today, the research team believe. Its properties could be adapted so that instead of causing muscles to contract, they would cause them to relax – helping people with facial paralysis.

O crocata is not just indigeneous to Sardinia but to the United Kingdom too. According to Botanical.com which reproduces online “A Modern Herbal” by Mrs M Grieve, the plant is known as Water Hemlock, Horsebane, Dead Tongue’ Five-Fingered Root, Water Lovage and Yellow Water Dropwort. The most dangerous part of the plant is the root.

It would seem to be one of the most poisonous of our indigenous plants and has been responsible for many fatal accidents. Mrs Grieve notes, for example, the deaths of workmen who mistook the roots for parsnips - death occurred within three hours.

Unsurprisingly the plant has never been used to any extent in medicine, though in some cases it has been taken with effect in eruptive diseases of the skin. The root has been used in poultices for whitlows and to foul ulcers...

Hmm I am glad that alternative medications exist, but it is good to live and learn!
Posted by jams o donnell at 7:36 pm

Glad you find it interesting Cherie

there are a lot of poisonous, hallucinogenic and medically powerful plants in the uk...

That's for sure mutley. You cou;d poison a plenty with indigenous plants!

I have seen that plant growing but I had no idea it was poisonous. Thanks for the insight.
:)

Thanks. It certainly fascinated me too RB

Ardent my take on the umbellfer family is to avoid them all, even though many are not toxic!