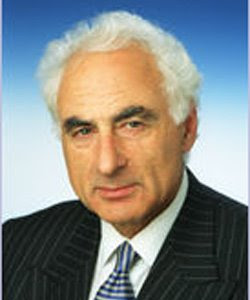 Yesterday Tory MP, Anthony Steen launched a “spirited and controversial” (for that read downright stupid and arrogant) defence of the parliamentary expenses system. In his view it is public "jealousy" that has fuelled the recent storm over expense claims (if jealousy describes downright anger. He also stated that taxpayers have no right to see the details of individual MPs' claims.

Mr Steen made his comments in a BBC interview shortly after announcing that he would be standing down at the next election. It had emerged that he claimed £87,729 over four years to maintain his Devon country house. The payments included money to inspect some of the 500 trees surrounding the property and to guard his shrubs from rabbits.

"I think I have behaved impeccably. I have done nothing criminal. And you know what it's about? Jealousy. I have got a very, very large house. Some people say it looks like Balmoral, but it's a merchant's house from the 19th century," he said. "We have a wretched Government here that has completely mucked up the system and caused the resignation of me and many others, because it was this Government that introduced the Freedom of Information Act and it is this Government that insisted on the things which caught me on the wrong foot."

He compared the recent stream of revelations to a soap opera, he said: "What right does the public have to interfere in my private life? None. Do you know what this reminds me of? An episode of Coronation Street. This is a kangaroo court."
Unsurprisingly Tory chiefs are less than pleased that wealthy MPs are seen to be milking the expenses system (and for the record, as a Labour party member I am bloody furious about the greed of a Labour MPs) has undermined attempts to modernise the party's image. Steen has been warned to stay silent in future or be stripped of the party whip.

Steen later issued an abject apology, saying: "I was so deeply upset with the situation, which resulted in me overreacting. I am sorry that in the heat of the moment I said inappropriate things... about the Freedom of Information Act, which I entirely support."

If Steen had had any sense he would have made a few words of contrition, paid the money back, then shut the hell up until he stood down next year. In the meantime Parliament could have gotten on with urgent Augean-stable style cleaning (as it must do of course)

I know the expenses scandal has been news for several weeks now and has seen the downfall of a rather mediocre Speaker (and hopefully the deselection of some greedy Labour MPs) but Steen just takes the biscuit. I don’t bother much with political posts (even though the Poor Mouth was initially intended to be at least partly a political blog) but I didn’t think things could have hit a lower point... until he opened his mouth.

I wonder when the public will start to hold politicians in higher regard than dog turds.
Posted by jams o donnell at 6:19 pm

um never. at least you folks force your 'representatives' to resign- we just let ours stay in congress forever and keep 're-electing' them over and over and over- remember ted stevens?

All this stuff has depressed me immensely. I naively thought that our MPs were doing a job for our benefit. I can't believe some of the things I've been hearing. THis man did take the cake (from Harrods, of course).

Have politicians ever been more popular than dog excrement?

The right to recall, would be a step forward.

To plead jealousy implies that we all had an equal chance to claim expenses for our tampons - we of the lesser self-employed human variety are only allowed to claim travelling and accommodation - and then only for a maximum of two years in one place of employment. Where's the equality?

I think the biggest problem - perhaps one could call it even tragic for our society as a whole - is that many if not most representants of their voters, those who could and should give example, seem to have completely lost mens rea, or how would you call it in English? The sense of wrongdoing?

It's a shame, anyway.

Stupid man. He must be gutted he will actually have to use his own money to meet his expenses from now on, instead of the taxpayer's.

This whole expenses fiasco shows our MPs have been practising deeply entrenched, institutional fraud, since who knows when. In fact, it seems to me that it's all been going on for so long, and has become so acceptable in Westminster, that most of the greedy buggers had no idea they were doing wrong.

If there is one thing I have learned, by being connected with other countries Via Internet, is that most politicians, all over the world, are totally dishonest. In Canada, one of our ex-prime ministers, Brian Mulroney, is investigated presently for having accepted, a few years ago, 3 hefty payments ($225,000 each) from a private businessman (Schreiber). It's costing us (the taxpayers) 14 millions trying to find out why he got that money which he never declared as income, and on which he never paid taxes. It's disgusting and it's not confined to a specific political party. The other side has commited similar crooked things. We can't trust anyone anymore...if we ever could!

Thanks for your comments. Sory I can't answer more fully this time. I really do fear that it will cause a backlash that opens the doors to scum like the BNP