Another dictator deficient in the testicle department? 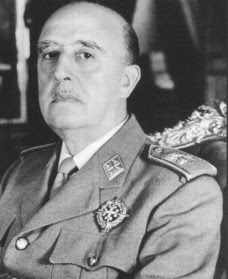 Perhaps there is a reason for his baleful stare
The question of whether Adolf Hitler had one less than the normal complement of testicles was dealt with in depth on the Poor Mouth last year (here and here). Although the jury is out on the number of knackers in Der Fuhrer’s draws, it now seems that Spanish dictator Franco possibly had one lump rather than two.

According to the BBC a new book claims that when he was a captain Franco lost a testicle as a result of a battle injury sustained at El Biutz, near Ceuta in North Africa, in June 1916.

In a new book, Historian Jose Maria Zavala states that Dr Ana Puigvert had been informed of Franco’s condition by her grandfather, Antonio Puigvert. A urologist, Puigvert is known to have treated Franco as a patient. "Franco was monorchid - he had only one testicle," she said. 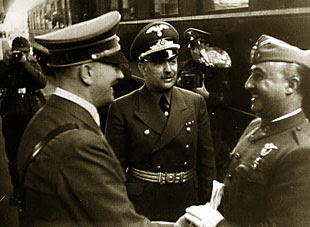 Were they both members of the One-Bollock Brotherhood?
Apparently biographers have speculated whether this injury had affected his reproductive organs of the dictator. If so it did not stop him fathering a daughter Carmen Franco y Polo, in 1926. (unless he was of course cuckolded by a plucky little private!)

So there we are. I wonder which dictator will be next to be shown to have a meat and one veg. Here is a selection of current odds from Paddy Power:

Bet against that together we have three testicles?
Oops, so you have none?

How about Gordon Brown?

Haha Sean, the oldies are goldies!

One eye yes.. Then again he is not a dictator by any stretch of the imagination

Some dictators had children as Stalin.

I Heard The cineast Tarentino made a film presented at le festival de Cannes about an other historia fiction against the Nazis! I wait to hear more about.

Interesting. I wonder..... is being a dictator a compensation for having one less testicle? Did they wake up one day and say...."hmmm I have one testicle less then the next looser, so I will simply make everyones life miserable. Pay back time..." :)

THat's true Ren, but with the tales about Hitler and now Franco, not to mention rumours about the Latvian dictator whose name escapes me, I wonder if there is a trend!

I wonder what it will be like Claudie. I await reviews with intereest

That could well be the case Nevin!

George W was a high grade wanker! I enjoy your comments as much as your posts.