From Private Schulz to the misplaced trust of Elyesa Bazna 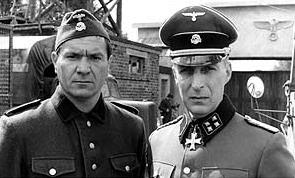 One of the few advantages of my ruptured tendon is that I have finally gotten around to watching some of the DVDs that I have been given as birthday and Christmas presents. I have recently finished watching Private Schulz, a wonderful comedy-drama that was shown on the BBC in early 1981. It was only recently released on DVD.

Fortunately Private Schulz was every bit as good as I remembered it. The first episode alone featured Schulz, a fraudster:
Needless to say it ends in farce. Schulz was played by Michael Elphick and the series featured Billie Whitelaw and the late Ian Richardson. 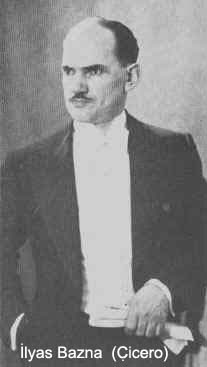 But I digress, it was while looking up Operation Bernhard that I came across the name Elyesa Bazna(aka Ilyas Bazna) . Codenaned Cicero, Bazna was an Kosovan Albanian was an agent of the Reich in Turkey.

Bazna moved to Turkey when very young. In 1942 he took employment as the valet of the British ambassador Sir Hughe Knatchbull-Hugessen. Bazna started to photograph secret British documents the following year. He approached Ludwig Moyzisch, an attache at the German Embassy, seeking money for the documents he initially photographed. He was taken on as a paid German agent.

Bazna leaked important information about many of the international conferences, bombing raids and even some (“fuzzy”) information about Operation Overlord. Mercifully neither the German Foreign Office nor the Abwher considered his information unreliable. Cicero still continued to provide information and the money rolled in. It was not until he provided documents that predicted an air raid on Sofia that he was considered a reliable agent

Meanwhile increased security at the British Embassy made it more difficult for him to obtain documents.I n addition Moyzisch had hired a new secretary who was in fact spying for the Allies. After the secretary defected to the United States in early 1944, Bazna left Sir Hughe's service.

Anyway, to cut a long story short Bazna received £300,000 for his services. However, when he tried to bank the money after the war he discovered that he had been paid in counterfeit notes produced during Operation Bernhard.He did try to sue the West German government for outstanding pay. Unsurprisingly he was not exactly successful...

There is a moral in this tale I am sure. Bazna’s motive was not ideological but stemmed from a desire for cold hard cash. Well it was cold hard cash he got... of a sort!
Posted by jams o donnell at 7:48 pm

Throughout the second half of this post I was expecting to read the phrase, “Cicero, as portrayed so memorably by James Mason in Joseph Mankiewicz’s film Five Fingers (1952)”, but it didn’t appear, so it’s here instead. (It’s a great and underrated film that may even be on DVD by now.)

Ah Anonymous, I have never actually seen the fil, or at least I don't think so. I will have to look out for it