Where are they now part 1 - David Lucas 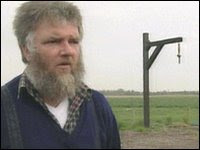 One of the earliest posts on the Poor Mouth was called Once a Jolly Hangman. It was about a Suffolk farmer called David Lucas who chose not to supplement his agricultural income by providing bed and breakfast or selling local craft wares. Instead he found a more gruesome and more lucrative way of augmenting his income - by selling execution equipment to countries including Zimbabwe.

A product range which included single gallows costing £12,000 each, and mobile "Multi-hanging Execution Systems" (up to six executions at a time) were popular (very popular with the tyrant who wishes to ensure that terror is cost effective I'm sure!).

Anyway it seems that Mr Scumbag, sorry, Lucas has found a way to lower him even further in my personal esteem - by standing as a BNP candidate in the forthcoming Euro elections. I am sorry I missed this piece of news earlier but last month Lucas was arrested on suspicion of selling illegal firearms. He was released on bail. BNP officials said he would still stand in the election.

Hmm what more to say..... (without use of invective and multiple expletives)
Posted by jams o donnell at 11:27 am

I did my bit, leafleting to raise awareness of what the BNP really stand for!

Glad to heaqr it Cherie. No leafletting for me this election what with my leg!

when one talks of Buddhism and karma, he has a lot to atone for and his karma will need quite a number of lifetimes to make up for this

A reincarnation as a dung beetle would be a useful start Bengbeng!

Multiple expletives: also for the people who'll vote for him. Even just one would be one too much!

Hmm... I wonder, will he fit that gallows in the background?

I am sure you are not the first to wonder Snoopy!

Could have been worse, he might have sent hundreds of British servicemen to their death in Iraq or Afghanistan. Get real you bunch of muppets!

I'm sure some of these whiter than white commentors would think twice if their children or loved ones were raped or murdered and support the death penalty.

If you think gallows is such a bad thing then don't forget that one of Britains most lucrative sales is in killing weapons to 3rd world dictators.
You don't see the Bigwigs getting arrested for arms-dealing yet it's ok to arrest the craftsman who is trying to make money in life.

Actually, this so-called news story was a hoax perpetrated by the farmer, intended to wind up gullible media types. Guess what? Everyone swallowed it hook, line and sinker and it's generated plenty of outraged comment, just as the hoaxer intended.

Time for a reality check, folks. There never was a trade in gallows. It was just a big wind-up. Stop and consider for a moment: why would anyone in their right mind buy a gallows in the UK and then transport it all the way to Africa. A gallows isn't some complex device with hundreds of moving parts. It's actually very simple, the sort of thing that a couple of competent wood-workers could build in a couple of days, for a tiny fraction of the hoax price of £12,000. Switch on your critical faculties and the more more you think about this story, the less likely it all seems.