A Black Tommy at the Somme 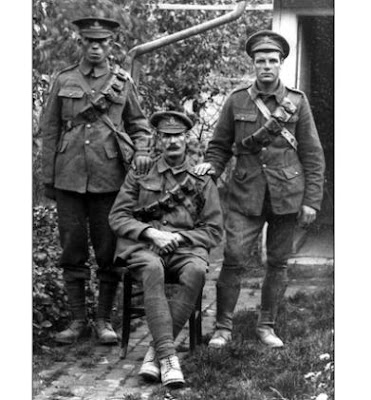 Saturday’s Independent carried a photograph (above) featuring three artillerymen. It is a very rare example of an image of a black British soldier from WWI.

The photograph is one of almost 400 snaps of British soldiers on the eve of, and during, the Battle of the Somme in 1916. The photographs, all of which are preserved on glass plates, lay undisturbed in the attic of a ramshackle barn 10 miles behind the Somme battlefields for more than 90 years. When the barn changed hands in 2007, they were thrown on to the street. Passers-by collected a few and eventually the historical value of the plates, some in perfect condition, some badly damaged, was realised.

Recently the photographs have been assembled and their images printed, scanned and digitally restored by two local men, Bernard Gardin and Dominique Zanardi. M. Gardin, 60, is a photography enthusiast, while M. Zanardi, 49, owns the "Tommy" cafe, which sits in the heart of the Somme battlefield in the village of Pozières.

An amateur photographer, possibly a local farmer, is believed to have taken the photographs in the winter of 1915-16 and the spring and summer of 1916. The unknown photographer presumably made a crust by charging British soldiers a few francs to take a snap which they could send home to their loved ones. The collection forms a record of the British army on the eve of and during the Battle of the Somme The identity of the soldiers is, and may always remain, a mystery.

The image of the black Tommy in possibly the most historically significant. There was a small black community (about 20,000 strong) in Britain during WWI, mostly living at sea ports. Black Britons are known to have volunteered and fought on the Western Front but photographs of them are extremely rare.

The British First World War historian, Michael Stedman, has identified the three soldiers in the photograph as members of the Royal Regiment of Artillery or Royal Garrison Artillery. "Look at the chalk dust on their boots and general cleanliness of their kit," he explains. "Chalk dust only arose in the summer campaigning on the 1916 Somme battlefield as the terrain dried out. My bet is that this photo was taken in the summer of 1916 (probably August/September). The men look worn, gaunt, frayed and very fit and lean, from relatively little food and an open air existence. I suspect they have been in action for some time ... They are clearly friends – hands on shoulders and all that."

There were West Indian and Gold Coast (Ghanaian) units in the fighting on the Western Front but the story of black British soldiers scattered in otherwise white front line units has been sparsely recorded. Relations between white and black soldiers were reported to have been good although there was a riot – fomented by white South Africans – between white and black soldiers recovering from their wounds at a hospital in Liverpool in 1918.

In this image, though, there is none of that potential for animosity visible: only the natural brotherhood of three men thrown together by a brutal war, and relying on each other to survive. 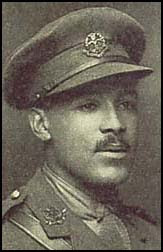 Those with a knowledge of the history of black Britons will know that Walter Tull (above) who became the first black person to be commissioned in the British Army. He died in action in 1918. Interestingly his brother Edward is believed to be Britain’s first black dentist
Posted by jams o donnell at 11:42 am

Thanks for the interesting info :-)

Ren, Cherie. I'm glad you find this as interesting as I do. THe find was truly marvellous

Maybe it was a blessing there were so few. The small number probably allowed the UK to avoid the legacy of segregated units.

jams, thanks. You might also find the Buffalo Soldiers interesting. Just google the term; read the wiki and the material at http://www.buffalosoldier.net/. The museum is only about two miles from our home; we've gone there several times. The short version: "... the 'Buffalo Soldiers' were established by Congress as the first peacetime all-black regiments in the regular U.S. Army." Not surprisingly, their service was distinguished and their history is fascinating in much the same manner as your Black Tommy at the Somme.

The British Army was not segregated and very glad I am of that.It is true that immigration from the west indies did not start until after WWII

Thanks for the link Steve. I don't know much about the Buffalo Soldiers. I look forward to reading more