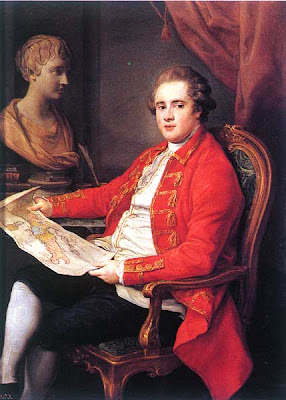 The relationship between Nelson and Sir William was apparently cordial. According to the Telegraph not only did they share Emma, they also pooled their resources to cover the huge sums necessary to meet her expensive tastes. 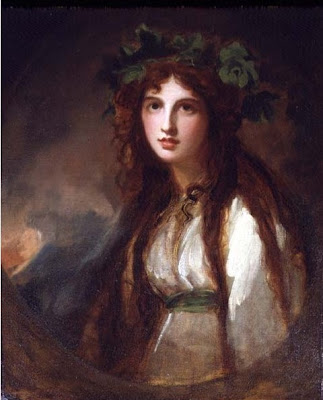 Emma Hamilton as painted by George Romney
A set of household accounts covering the period of the unusual domestic arrangement, which is up for auction next month, show that Lord Nelson and Sir William split many bills evenly. They paid out up to £156 4s 4d a week – around £11,000 in today's money – to local tradesmen for treats such as fresh meat, fish and oysters, to which Lady Hamilton was particularly partial. 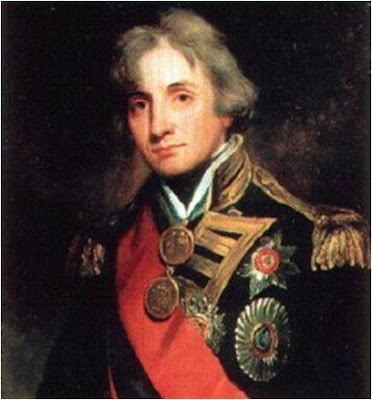 Lord Nelson
The naval commander's infatuation proved to be an expensive business; a document uncovered two years ago suggests that he paid his wife Lady Nelson the equivalent of £18,000 a year after abandoning her.


Lady Hamilton remained with Lord Nelson following the death of her husband in 1803, but ended her life in poverty (she died of Amoebic dysentery in Calais) after he was killed at the Battle of Trafalgar two years later.

The accounts, signed by both Lord Nelson and Sir William's steward Francis White, are expected to fetch up to £9,000 at Christie's in London on June 3.

Horatia married a clergyman, had ten children and lived to a ripe old age.
Posted by jams o donnell at 8:16 pm

I have always been fascinated by these three, especially Emma herself.

Isn't it amazing how papers like this endure through time?

Thanks jmb. Emma was a fascinating woman. another who was in the same league was Lola Montez!

It's good that these papers have survived!