Scientists believe that a rather grotesque carving in mammoth ivory may be the world's oldest depiction of a human figure. According to the Times the 6cm-tall (a bit under 2.5 inches) figurine, which portrays a woman with huge breasts, big buttocks and exaggerated genitals, is thought to be at least 35,000 years old. It was found in Hohle Fels Cave in southern Germany.

The Venus of Hohle Fels was found in six fragments in September 2008. It is still missing its left arm and shoulder, but researchers are hopeful these will emerge in future excavations of the cave's sediments. The figurine does not have a head. Rather, it has a carefully carved ring located off-centre above its broad shoulders.

The polished nature of the ring suggests the Venus was probably suspended as a pendant.The hands have precisely carved fingers, with five digits clearly visible on the left hand and four on the right hand. The pronounced breasts, buttocks and genitals familiar in later Venuses are usually interpreted to be expressions of fertility. 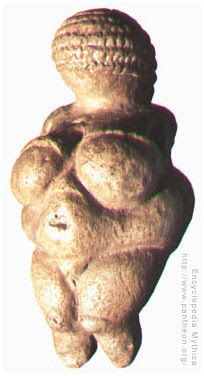 The Hohle Fels object is of an age where radiocarbon dating techniques are uncertain. Scientists say, however, that it is unquestionably older than finds associated with, for example, European Gravettian culture which from between 22,000 and 27,000 years ago. The most famous item from this era is the Venus of Willendorf (above) which was discovered in 1908.
Posted by jams o donnell at 4:05 pm

Ha ha, Jams, for a change the Flannophiles thought of posting the same.

Fascinating! The French in me delights in this type of discoveries. Imagining the carver, 35,000 years ago, I thought of Rodin also inspired by the naked human form...I wrote on Sean's post: Plus ça change, plus c'est la même chose. (The more it changes, the more it's the same.)
Thanks, Jams.

It is an odd representation of teh human form... at least to my eyes Claudia but it is magnificent in its own way. Rodin's work is its worthy successor!

I have just come over from Sean's site. Good to see that you two fellows are enthused about historical art.:)

Interesting anyway, to describe breasts and bollocks of a 6cm-tall figure as huge respectively big.

No complaining here, though. Somehow I feel I got a bit closer to understand what's relativity.

It was a story that leapt out at me Ardent!
It wasn;t the, ahem, big boobies, Claudia,, no sirree!

Well it is relative size Sean!

That first figurine reminds me most a roasted duck. Then, it's before lunch here. Re the second one: I doubt that it's all about fertility. Fertility, IMHO, is just a politically correct term for men's eternal attraction to big mammary glands.

Haha Snoopy! I am sure that we men have not changed one iota in that respect