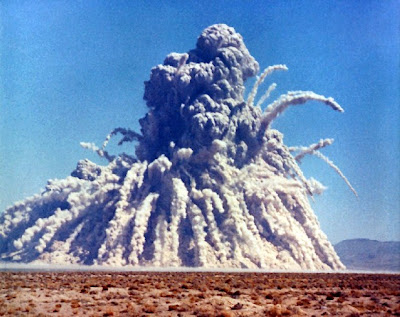 Radio Five Live has reported on the worldwide disapproval of the recent nuclear test in North Yorkshire. "There has been widespread condemnation of North Yorkshire's decision to carry out an underground nuclear test. The UN secretary general, Ban Ki-Moon, says he is deeply worried."

In an address from the presidential bunker in Ri Pon, the capital of the Democratic People’s Republic of Yorkshire (DPRY), T’Leader Ken John Arkwright stated that this was a triumph for workers and anti-imperialists across the world:

“It is indeed a great achievement that has made the imperialists tremble with fear and has shattered the arrogance and pride of the imperialists. The stock markets and currencies have fallen.Meanwhile the crazed imperialist politicans yap yap endlessly “ he said. “We have turned the DPRY into a mighty power that can defeat any enemy and can defend itself in any situation against any aggressor”

Unsurprisingly the Yorkshire Friendship Association were fulsome in their praise. The people of South Yorkshire were, by comparison, deeply concerned..
Posted by jams o donnell at 10:09 pm

North Korea's concept called juche (self reliance) is as extreme an example, as can be, of Stalin's socialism in one country.

Only the US dropped nuclear weapons on civilians (Hiroshima Harry).

THat is one way of looking at it. I think juche would be better served by being able to feed its people though!

Another export market for South Australian Uranium. Who do we contact?

You can deal direct with T'Leader at the followign address?

Can't trust those Northies I tell ya. Can't turn your back on 'em for a second!

My heart is with Northies. The class traitors and renegades of South Yorkshire deserve a harshest possible treatment.

I hope the people's paradise in Ri Pon smashes the revisionist rabble in the South!