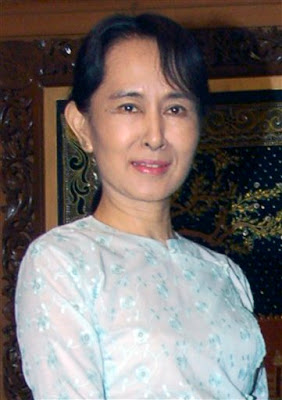 Perhaps it comes as no surprise, given the nature of the Burmese regime, that Aung San Suu Kyi has been charged with violating terms of her house arrest following the arrest last week of John Yettaw. She could face a prison sentence of up to five years.

Suu Kyi was taken to a prison compound where she will be tried in connection with Yettaw’s (for the want of a better word) trespass. He was arrested on 6 May after swimming across a lake to her house and staying there secretly for two days. Suu Kyi’s trial will almost certainly be used to justify another extension of Suu Kyi's illegal detention which officially ends on 27 May.

"Everyone is very angry with this wretched American. He is the cause of all these problems," a Suu Kyi lawyer, Kyi Win, told reporters. "He's a fool." The lawyer said the incident was merely a breach of security in the lakeside area where authorities normally keep close watch over Suu Kyi and her household.

Kyi Win said Suu Kyi would be held in a house inside Insein compound, a prison holds both common criminals and political prisoners and where, according to human rights groups, torture and mistreatment of prisoners are common. Also to be tried are Suu Kyi's two helpers, Khin Khin Win, 65, and her daughter Win Ma Ma, 41, who have lived with her since her current detention began in 2003.

Suu Kyi, 63, has spent more than 13 of the last 19 years including the past six in detention without trial for her non-violent promotion of democracy, despite international pressure for her release

I daresay that Yettaw is viewed as a godsend by the Burmese regime given that they were probably down to using “wearing a loud shirt in a built up area at night” as a justification for her continued detention ... not that they needed an excuse I suppose.
Posted by jams o donnell at 8:47 pm

How cometh that whenever there are news from Burma, I am getting close to lose my contenance?
Bucking fastards!

You and me both friend!

The Burmese govt is losing all credibility in the yes of the world. if it were not for this guy, they would have trumped up some other or any other excuse real or made up.

Such a brave lady. Do you think they will ever free her, jams?

Very true Bengbeng. THey would find any excuse, I'm sure.

I'm not sure Welshcakes. I'm really not sure they will