It would seem that the worst case scenario of the most pessimistic doomsayer has been exceeded following news reports of a dangerous mutation of the H1N1 virus.

The mutated virus, named H1Z1, is able to restart the heart of its victim for up to two hours after the initial demise where the individual behaves in extremely violent ways from what is believe to be a combination of brain damage and a chemical released into blood during “resurrection.”

H1Z1 was first identified in Mexico, the epicentre of the Swine Flu outbreak, but now it has spread to the UK leading to a small outbreak of “zombism”

The World Health Organization (WHO) has raised the alert to phase six, its highest level, and advised governments to activate pandemic contingency plans. In Mexico, the epicentre of the outbreak, President Felipe Calderon urged people to stay at home over the next five days. There are many cases elsewhere - including the US, Canada, Latin America, Europe, Israel, and New Zealand.

BBC health correspondent Mark McGrith says the raising of the WHO alert on Wednesday suggests a global epidemic, or pandemic, is imminent.

In the latest developments:

• The Netherlands confirms its first case of zombie swine flu, in a three-year-old boy recently returned from Mexico. After passing away early this morning, he rose from the dead and lunged at his mother.
• China's health minister says that the country's scientists have developed a "sensitive and fast" test for spotting swine flu in conjunction with US scientists and the WHO. The country has recorded no incidence of the flu yet. There methods, however, have been ineffective in spotting the H1Z1 strain.

At the meeting of health ministers in Luxembourg, a French proposal for a continent-wide travel advisory for Mexico will be discussed. It is unclear whether the EU executive has the power to impose a travel ban. Other members are resisting calls to implement travel bans or close borders, on the grounds - backed by the WHO - that there is little evidence of their efficacy.
The EU ministers will also try to agree on how to refer to the new virus. The European Commission has been calling it "novel flu", replacing the word "swine" to avoid prompting a fall in demand for pork and bacon. 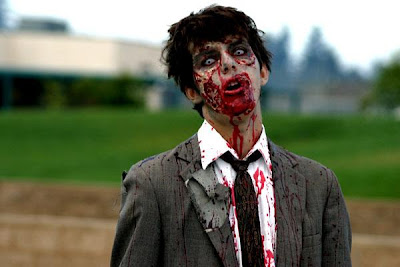 Stop Press: Our local radio station has just announced that the first case of H1Z1 has been reported in Havering, Last night a young man with a vacant stare (photo above) was found to be acting violently outside the Fool and Firkin in the market place. He was taken to Oldchurch hospital where the virus was found. The is now in isolation. A spokesman for the hospital that identification of H1Z1 sufferers in Romford may be difficult as many people normally act in a violent and uncoordinated manner.
Posted by jams o donnell at 10:45 am

丽英 said...
This comment has been removed by a blog administrator.
11:19 am

Oh no! Zombies! I knew it was only a matter of time. I suppose that all the advice from this Nursing resource doesn't apply to them.

He he. This explains a few people I have seen recently. Thanks for the warning.

Sadly the behaviour of zombies is replicated by a lot of people, Snoopy!

Have you seen "Night of the Living Dead"? That is the classic zombie film.

Ugh! So is there really a virus out there that turns its victims into Pete Doherty--??!?