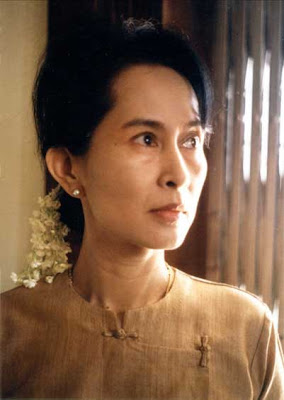 Today marks the 5,000th day of incarceration for Nobel Peace Prize Winner (and who should have been the real leader of the Burmese state in 1990) Aung San Suu Kyi, The brutal scum that make up the Burmese junta must have thought that by putting her out of circulation she would have been forgotten by the world. How wrong they were! That said the response of the world could and should have been far more robust than it has been.

We are reminded by Andrew Buncombe in today’s Independent on Sunday that Aung San Suu Kyi will spend the day in detention accompanied by two women. At present she is being held in a "guesthouse" in the grounds of Rangoon's Insein jail. For the six previous years she in a lakeside house with no television, radio or phone.

As is (or should be) well known she has been charged with violating the terms of her house arrest after an American swam to her home and spent the night there. As Andrew Buncombe reminds us her real “crime” was to win an election nearly two decades ago. Moreover, she strikes fear in the heart of the vermin Than Shwe and his junta because even now she can do something they never could for all their brutal force – and that is to unite the Burmese people.
Aung San Suu Kyi and her party, The National League for Democracy (NLD), won a landslide election victory in 1990. But this election was simply ignored by the junta. It was at that time that the opposition leader was first imprisoned, for a period of three years.

She has spent almost 14 of the past 19 years under house arrest. On occasion, the junta has made clear it would release her if she agreed to leave Burma but she has always chosen to remain a part of her country's struggle. In 1999, while temporarily free, she faced the agonising choice of visiting her dying husband, the British academic Michael Aris, who had been refused a visa to enter Burma. Fearful that if she left she would never be allowed to return, she stayed in Burma without seeing her husband again.

Mark Farmaner, of the Burma Campaign UK, said the reason for her continued detention was very simple. In a country that has been brutalised by violence and the fear of violence, ordinary people will still, in private, whisper about the "the lady" and how she could help fix their broken land. "It might be one of the most brutal dictatorships in the world but they are terrified of this one woman," he added. "They hoped by keeping her detained the world would forget about Burma, but the opposite has happened. The fact that she has now spent 5,000 days in detention should shame world leaders who have tolerated this situation."

Ms Suu Kyi is just the best known of an estimated 2,000 or more political prisoners being held by the regime. I hope that the day comes and comes soon that the Junta will be swept away into the sewers of history, stopping first to receive a very long dose of what they have inflicted on these people.
Posted by jams o donnell at 6:25 pm

And there are an 'estimated' 2,000 other prisoners ... monstrous.
As for Aung San Suu Kyi, thank you for keeping her in our thoughts.
PS Sorry to wander off-topic; but it's great to have located another Brian O'Nolan fan!

It is an utter disgrace. But then Than Shwe and his brutal rabble are a nuasty bunch.

Glad to know there are other Flann O'Brien fans out there!

Well done for posting this, jams. What a nasty regime that is. Assk's courage is amazing.

Thanks Welshcakes I felt it was an important day to highlight

Ah, Jams, sometimes I do just not find words.
Anyway, to call them 99% bicycle, would be an utter insult - for all bicycles.

Ahem, delighted to see there's found another Flannophile her path to the Poor Mouth.

Flannopphiles seem to find each other eh Sean!