An Austerity Gift For Council Of Europe Meeting

In days of yore when New Labour walked the earth, the Government provided Conway Stewart fountain pens as gifts for attending heads of state attending a G8 meeting (The Conway Stewart brand was resurrected in the late '90s and the company now produces quality pens in limited numbers, rather than the now highly collectable mass market pens it produced up to the 60s...The less said about the original company's later products, the better!). Nowadays such extravagance is not contemplated.

Ministers attending a Council of Europe meeting in Brighton on human rights law in Brighton had to make do with far less expensive gifts - a stick of rock! 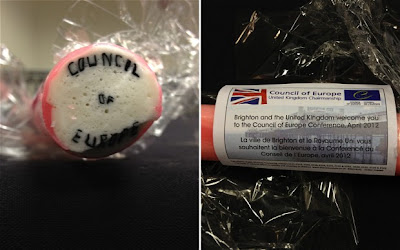 According to the Telegraph five hundred sticks of pink rock, with the words Council of Europe running through the centre, were ordered by the Ministry of Justice and Foreign Office at a cost of £380.

They were apparently piled high on a table leading to the main hall at the Brighton Centre, as representative of the 47 states in the Council of Europe gathered  to discuss reform of the European Court of Human Rights.

Journalists were not allowed to see the promotional gifts and one press officer claimed Brighton Council had paid for them before suggesting a Freedom of Information request, taking up to three weeks, would have to be made in order to find out where they came from.

The previous day, the Lib Dem justice minister Lord Mcnally told a conference at Parliament: “I’m not sure who had this brilliant idea but all the delegates are going to be presented with a stick of Brighton rock.I’m from Blackpool so I have great experience of this delicious confection. But for those of who are not, just make sure that your dentures are in.”

A spokesman for the Ministry of Justice said: "It's customary for the host nation to give a gift to delegates. This represents good value for money."

Hmm while the rock cost a mere £380, I can imagine that the claims for dental work arising from trying to eat those awful things probably runs to the tens of thousands!  It probably would have been cheaper to give each minister a  Conway Stewart pen after all!
Posted by jams o donnell at 5:36 pm

Oh, but I love sticks of rock. I've never seen them here in Australia so I guess they hold a nostalgic appeal for me.
My advice: don't chew, suck.

He he. Maybe chewing gum next time, then? Without sugar, to be totally PC, of course.

I can think of other scenarios where that is excellent advise too Syncy!

Probably they will buy the sort of chewing gum that sucks out fillings knowing the MoJ!


Word verification reminding me my credit card is a little overdrawn: ioucc