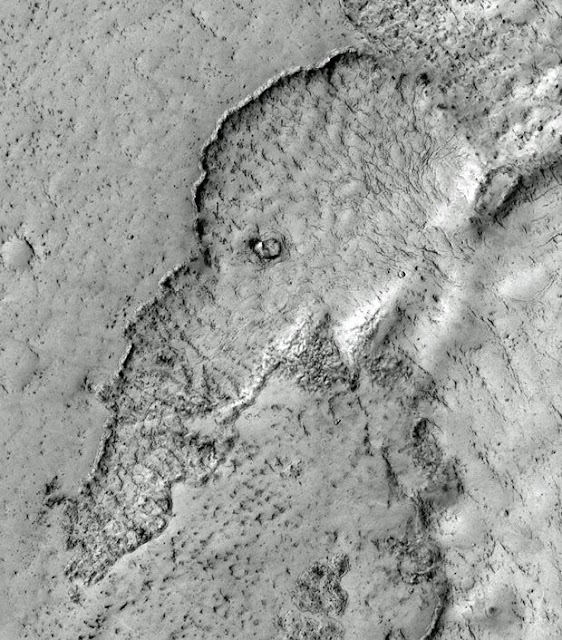 The Mirror has ublished an image that cold have ramifications for our assumptions about early inhabitants of Mar. What clearly is an outline of an elephant's head was captured by NASA's High Resolution Imaging Science Experiment (HiRISE) which is carried on the Mars Reconnaissance Orbiter satellite .

The outline may be construed as just a rock a rock formation formed by lava flow from Elysium Planitia, the second largest volcanic region Mars. However, it may. like the Cydnia face photographed during the Viking expeditions in the 70's indicate that Mars was once inhabited by space elephants.

"This proves for once and for all that Mars was once inhabited by giant astroderms. It is obvious that a giant astroderm, perhaps 10km tall was  caught in a lava flow and preserved just waiting our discovery" said Julian Crandoffer spokesman for the exobiology unit of the Star Federation (Nuneaton Branch) "I am sure that further research will provide evidence fo claims that mammoths were genetically miniaturised versions of the Mars Astroderm."


I love making up quotes!
Posted by jams o donnell at 2:48 pm

Oh yeah, how'd they get 'em up there then?

Pretty desperate stuff from the Mirror!

In space ships of course, James!

Ah Stan I made up most of the text. The Mirror clearly indicates that this is pareidolia at work

Huge elephant thanks, Jams. I might have missed that monumental discovery!

Glad to be of service Claude!

I had to check the date when I read that!

Praise be to Ganesh!

They probably arrived in great ships flown by the Astrowhales of Poseidon.

Sometimes you should not believe what I write Liz but the pic is real if the text isn't!

Um, that trunk looks more like a penis to me.

a penis? Not like any that I've seen lately ;-)

Oh, I know, Jams. But the similarity is so tenuous; by no means "incredible", as they have it.

Haha Syncy I am with Mursie. Not see none like that of late but then I've just been looking down!

Still it gave me a bit of fun Stan!

Jams, you're right. I was having a cross moment! Pareidolia is no place for exacting standards.

Now worries Stan. That is true!

A penis with plenty of foreskin. :)

Like Bernadettte's dead lover in Priscilla call him trumpet!

Ok, it's a plenty-foreskinned-penis-trunked giant martian elephant fossile. So what? It doesn't prove intelligent aliens exist, does it?

Ok, it's a plenty-foreskinned-penis-trunked giant martian elephant fossile. So what? It doesn't prove intelligent aliens exist, does it?

Of course not.... Perhaps you didn't realise that What I wrote under the pic was a total fiction!