What the Spanish Republicans did next: WWII

Franco, vile a man as he was at best as a half-hearted supporter of the Axis during WWII.  Whether by accident or design, Franco's conditions for supporting the Axis turned out to be too much for Hitler to digest and as a result Spain remained neutral during WWII. That said Franco did supply the Axis with essential materials, especially tungsten, and provided troops to fight on the Russian Front in the form of the División Azul (Blue Division). A total 45,000 spanish soldiers saw service in the USSR taking 14,000 casualties. 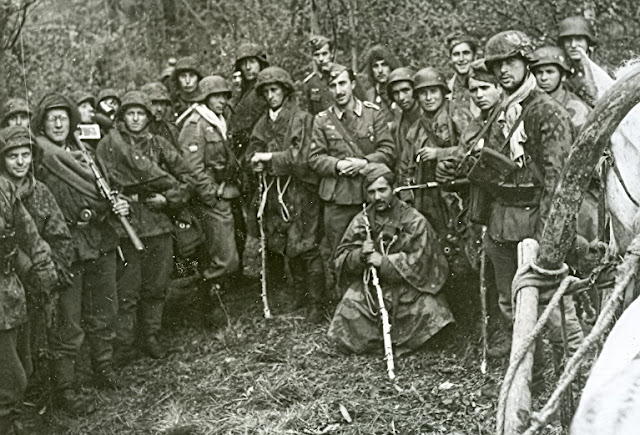 Spaniards of the Blue Division

The Blue Division was recalled in March 1944 but several thousand Spaniards fought on in the successor unit the Legión Española de Voluntarios (The Blue Legion which was disbanded in late 1944) and in other Axis units.


It should be noted that more Spanish republicans fought against the Axis during WWII. According to an article,originally published by Anti Fascist Action and posted here over 60,000 Spanish exiles fought alongside the French Resistance, while thousands of others who served in the Free French army.

Fascist victories in Spain led to several waves of refugees crossing the French border. By June 1938 some 40-45,000 refugees had crossed and an alarmed French government ordered the border to be closed. However, with the fall of Catalonia in January 1939 a human tide flowed northwards. Behind them came the retreating Republican Army Despite the screams of the right wing press the border was opened to admit hundreds of thousands of civilians and combatants into France.

Whilst the refugees were now safe from Franco they were not given their liberty. Instead they were confined in camps and French police hunted down those who escaped confinement. The camps themselves were squalid placeds whith few supplies and virtually no medical care. Strict military was enforced and those identified as "criminals" or "radicals" were taken to separate prison camps,

Although the French government tried to encourage repatriation, both voluntarily and by threats. there were still at least 250,000 Spaniards in late 1939. As war loomed the exiles were given the option to leave the camps from April 1939. But this was on the condition that they either obtained an individual work contract with local farmers/ employers or enlisted in "workers companies" (labour battalions), the Foreign Legion or the regular French Army. About15,000 men joined the Foreign Legion, including former members of the Durruti Column (although these men were given the choice of the Legion or forced repatriation).

During the Blitzkrieg over 6,000 died in battle in French uniform and 14,000 were taken prisoner. These were not treated as prisoners of war but sent straight to concentration camps, primarily Mauthausen (Only 2,000 of the. Of 12,000 sent to that place of murder only 2,000 survived the war). Other Spaniards found themselves serving in Norway, as part of the expeditionary force to Narvik and Trondheim. They distinguished themselves by their bravery, but at a heavy price. Of 1,200 only 300 survived.

Fallowig the defeat of rance the Vichy regime wanted to make use of the vast amount of Spanish labour available in the South, so they established the Travailleurs Etrangers (T.E.). By the end of 1940 over 220,000 Spaniards were engaged in forced labour for French and German enterprises in France.

Within the Travailleurs Etrangers low level sabotage became the norm. In one incident 50 French mechanics suspected to be engaged in monkey wrenching were replaced by Spaniards. The level of inexplicable vehicle failure increased as the Spanish pleaded ignorance of the rudiments of motor mechanics.  The level of sabotage rapidly progressed to dynamiting of industrial installations and railways; grenade attacks on German military parades, canteens and barracks, not to mention individual assassinations.

By 1942 the French Resistance was firmly established, as any final illusions about the Nazis disappeared. Spaniards, primarily active in the South & South-East, organised themselves. In the 18 months before D-Day inflicted massive damage on infrastructure and tied down German troops across France. Between June 1943 and May 1944 nearly 2,000 locomotives were destroyed. In October 1943 alone, over 3,000 attacks were recorded on the railways, 427 resulting in heavy damage, with 132 trains derailed. In the South West such sabotage was so effective that by June 6th 1944 it took 3 days to travel from Paris to Toulouse! Needless to say Spaniards played their part!

Guerrillas were less numerous in the North, between April and September 1943 some 500 resistance efforts were recorded, 278 against railways and other infrastructure, killing 950 Germans and injuring 1,890. In Normandy and Brittany, Spaniards blew up electrical transformers, a railway station and switching yard and part of an airfield. Spanish resistance fighters in Paris assassinated General von Schaumberg, commandant of Greater Paris and General von Ritter who was responsible for the recruitment of forced labour. 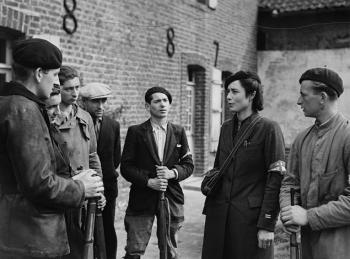 The effectiveness of the guerrilla campaign was to lead Eisenhower to comment that the Resistance effort around D-Day was worth a full 15 regular army divisions. Likewise Maquis support of the northern drive of the American 7th army was estimated as worth 4 or 5 divisions of regular troops. It should

Allied troops never entered much of the southern France. The whole area west of the Rhone and South of the Loire rivers was liberated by the national insurrection of the Maquis, as also was Brittany, save for the Atlantic ports with their strong German garrisons.

In the Department of L'Ariege the 14th Spanish Corps of Guerrillas  played a key role in evicting the Germans. Between June 6th and August 1944 they attacked German convoys and liberated several villages before taking the the Nazi HQ in the area. A strong German column attempted a counter attack but were caught in an ambush. Despite their logistical superiority they were pinned down by machine gun fire and 1,200 surrendered.

Other examples of the Spanish contribution include the Anarchist Libertad battalion which liberated Cahors and other towns and the participation of 6,000 Spanish guerrillas in the liberation of Toulouse. One notable encounter occurred as the Germans attempted to withdraw through the Gard area, following the fall of Marseilles. A group of 32 Spaniards and 4 Frenchmen tackled a German column (consisting of 1,300 men in 60 lorries, with 6 tanks and 2 self propelled guns), at La Madeiline, on August 22nd 1944. The Maquis blew up the road and rail bridges and positioned themselves on surrounding hills with machine guns. The battle raged from 3.00pm till noon the next day. 3 Maquis were wounded, 110 Germans killed, 200 wounded and the rest surrendered. 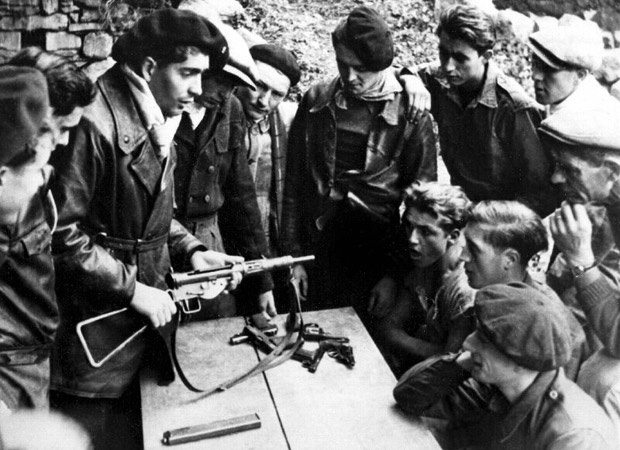 Over 4,000 Spaniards took part in the Maquis uprising in Paris that began on August 21st 1944. . Before long they were supported by regular troops from the Normandy beach-heads. The first units to enter Paris and reach the Hotel de Ville were from the 9th Tank Company of the French 2nd Armoured Division. But the lead half tracks bore the names of Spanish battlefields - "Guadalajara"; "Teruel"; "Madrid" and "Ebro". They were manned by Spaniards, of whom there were 3,200 serving in the 2nd Armoured. Many of these were veterans of the Durruti Column who had entered the French army from the prison camps in 1939 and gone on to fight in North Africa. 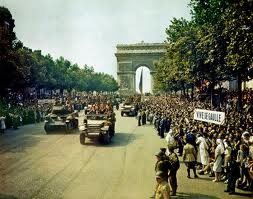 French 2nd Division parading in Paris, some of the crews may well have been Spaniards

The 9th Company featured prominently in the victory parade through Paris with its tanks drawn up at the Arc de Triomphe. They went on to see action on the Moselle and were the first to enter Strasbourg, supported by American infantry. Their campaign ended in Germany at Berchtesgaden, Hitler's "Eagles Nest".

Liberation saw a brief period of euphoria, with the Resistance bridging the vacuum of power in the South. But this was not to last. De Gaulle and his allies had no desire to see Southern France controlled by revolutionary elements. The Maquisards represented a threat because "an army of guerrillas is always a revolutionary army".  The Maquis were offered the choice of disarming or joining the regular French forces for the attack on German garrisons in the Atlantic ports.

In all 25,000 Spaniards had died in the camps or fighting in armed units. With the German surrender in 1945 the Spaniards believed that the Allies would turn their attention to Franco, but there was no international support for the overthrow of Franco.  struggle. Between 1944 and 1950 approximately 15,000 guerrillas fought in Spain but it was an unequal fight against a far better armed and supplied military and Maquis actions petered out in the early 50s. A few fought on until the 1960s. Jose Castro Veiga (Below), who was killed in 1965, was the last of them 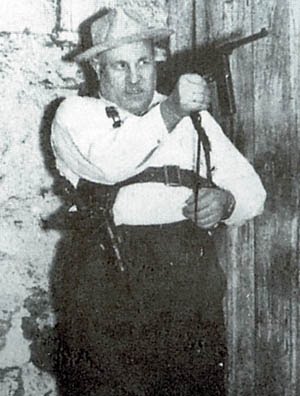 Although Franco stuttered on into the 1970s Republicans played an important part in the fight against Naziism.
Posted by jams o donnell at 9:56 pm

A extremely one sided article. What about the atrocious behaviour of the Republicans during the civil war. The mass murder of innocent monarchists, catholics, and liberals.

Franco fought against a repugnant regime of communists and anarchists, whose defeat was necessary to save Spain. Franco laid the basis for Spanish prosperity and its eventual transition to democracy.

ecause it is meant to be about what happened in WWII not thsn SCW. Look at the title

I didn't know the resistance continued for so long.

On what El Commandante said: I have (had) an uncle who fought with the Republicans against Franco. He told me more or less what E.C. is hinting at. Both sides were quite brutal. Plus, of course, Nazis and Stalin minding their own interests...

Longer than I thought too , mon ami.

Re EC's comment I am not contending that the Republicans weren't guilty of their own atrocities but I was not dealing with the events of the SCW but what happened after.

"Nationalists played an important part in the fight against Naziism."

What were commonly referred to as 'Nationalists'were in fact Francoists, supportd by the Nazis.
An important correction.