The Cocos Islands are an Australian territory about halfway between Australia and Sri Lanka consisting of two atolls and about two dozen coral islands. In 1942 it was the site of one of only a tiny handful of mutinies perpetrated by allied soldiers during WWII - Indian soldiers mutinied on Christmas Island and surrendered the island without a fight. The biggest mutiny took place at Salerno in 1943, there was also a mutiny of RAF personnel in India in 1946 although it was more of a strike than an actual mutiny. The ringleaders of the Cocos Islands mutiny, however,  were the only Commonwealth soldiers to be executed under military law during the Second World War. 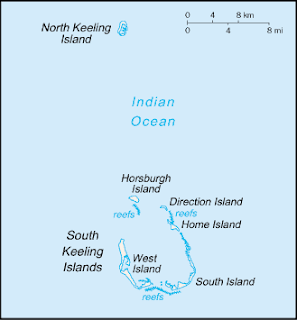 The Cocos Islands had no strategic value as such but it was the site of an important cable relay station. It was garrisoned by units of the Ceylon Defence Force, including the Ceylon Garrison Artillery (CGA) and the Ceylon Light Infantry (CLI).
By early 1942 British fortunes in the Far East were at their nadir with the loss of Singapore and Hong Kong had fallen while the army in Burma was in headlong retreat (undertaing the longest retreat in British army history)/ In addition Japanese aircraft had sunk the battleships Prince of Wales and Repulse and the aircraft carrier Hermes and Ceylon was at great risk from seaborne invasion. Morale amog soldiers on the island was dreadfully low. This was not only due to Britain's  military reverses but also because of the poor treatment meted out by the commanding officer George Gardiner and his second in command. It is also possible that they knew of the successful mutiny on Christmas Island two months before.
Led by Bombardier (corporal)  Gratien Fernando members of the CGA battery on Horsborgh Island mutinied (the numbers involved vary from 18 to 30 soldiers out of a total strength of 56) on the night of 8/9 May intending to hand the islands over to the Japanese. The mutineers planned to arrest Gardiner, disarm loyal troops then train the battery’s guns on soldiers on a neighbouring island. They would then signal Japanese forces on Christmas Island. However, the plan failed: Fernando’s men were poor shots and at a vital moment a Fernando’s Bren gun jammed. One loyal gunner, Samuel Jayasekera, was killed while the battery's deputy  commander, Lieutenant Stephens was wounded. The mutiny failed and the mutineers surrendered

Fernando had surrendered on condition that he would be tried in Colombo, perhaps to give a stirring speech from the dock. However, the 15 mutineers were court martialed on the Cocos Islands by Gardiner. Seven of the men who were found guilty were sentenced to death; but four of these sentences were commuted to terms of imprisonment.[1]

The condemned mutineers. Gratien, Carlo Augustus Gauder and Benny Da Silva, were shipped back to Ceylon for execution. Appeals for clemency for the mutineers' familiy failed and Fernando, Gauder and Da Silva were executed on 5 August 1942 at Welikada Prison.

No other Commonwealth troops were executed during the war for breaches of military discipline - the death penalty for desertion had been abolished in 1929 - although one soldier was executed under the treachery act - Theodore Schurch (but that is a different story) . The deaths of Fernando and his two colleagues probably served little purpose in the grand scheme of things. No Celonese cobat troops saw front line service after the mutiny.

Thanks for the history lesson!!!!