The Coronado Islands are a group of four islands off the northwest coast of the Mexican state of Baja California. Battered by the wind and waves, they are largely infertile and uninhabited except for a small military detachment and a few lighthouse keepers. The islands lie between 25.6 and 32 kilometers south of the entrance to San Diego bay, but only 13.6 kilometers from the Mexican mainland.

L Ron Hubbard is best known for setting up $cientology a so-called religion (but mainly a money grabbing organisation that peddles bullshit). If his "official" biography is to be believed then he seems to have defeated the Nazis and the Japanese in WWII single handed and received more decorations than the typical South American caudillo. 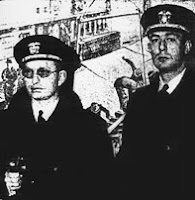 The reality is of course rather different. Hubbard (left in picture) never gained a rank higher than Lieutenant Senior Grade ) equals rank if Lieutenant in the RN or Captain in the army). He had briefly been posted to the Miltary Attaches office in Melbourne where he made a total arse of himself and subsequently commanded a small patrol vessel on the Atlantic coast for a brief time. In 1943 he was given command of the sub chaser USS PC-815 in 1943. In May of that year Hubbard "distinguished" himself by expending his stock of depth charges at what he believed to be a Japanese submarine (or two subs, one sunk, the other critically damaged if the $cientologists are to be believed hahahaha) but the Navy considered was a phantom accounted for by a magnetic anomaly and Hubbard's crew not using the sonar properly. 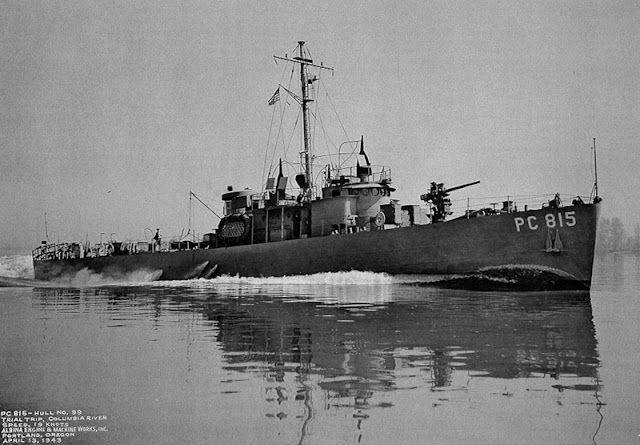 A month later Hubbard was the vessel San Diego, which was to become her home port. At the end of June was ordered to sea to join an anti-submarine training exercise. The exercise, held on June 28, ended early and Hubbard took the opportunity to order an impromptu gunnery exercise. He then anchored and unterdook small arms fire. He must have been observed by menbers of teh Mexican Navy detachment on the islands as the Mexican government sent an official protest to the US Government about his actions. 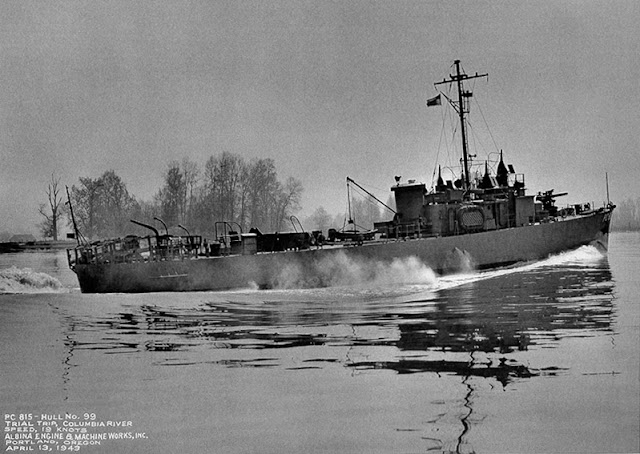 On June 30 a Board of Investigation was convened which concluded that Hubbard had disregarded orders, both by conducting gunnery practice and by anchoring in Mexican territorial waters without proper authority. Hubbard argued that his crew was inexperienced, it was foggy, and he was tired so he did not return to port as ordered. A month earlier in his after action report concerning the recent fiasco off Cape Lookout (the phantom sub hunt), he had described the same men as "experienced" and "highly skilled". Vice Admiral Fletcher, who both chaired the board and read the prior after action report, rated Hubbard "below average" and noted: "Consider this officer lacking in the essential qualities of judgment, leadership and cooperation. He acts without forethought as to probable results. He is believed to have been sincere in his efforts to make his ship efficient and ready. Not considered qualified for command or promotion at this time. Recommend duty on a large vessel where he can be properly supervised". Hubbard was relieved of command effective July 7, 1943.

Hubard later saw brief service on yhr amphibious cargo ship USS Algol. PC815 saw little further ctive service before meeting its end after a collision with a US submarine in September 1945. One crew member was killed.

I will not say a word against the men who crewed small vessels during WWII. They provided an essential service in often perilous conditions. Hubbard claimed to have been a much decorated war hero but the truth is that he was an incompetent with a penchant for self-aggrandisement. Hubbard's lies and bullshit have been debunked widely but I couldn't help adding another tiny bit to the pile!

Ah yes, Elron. The really amazing thing is that so many apparently educated intelligent people seem to have bought (or paid) into his scam.

Travolta, Allie, Cruse ... did I say intelligent? Maybe I should think that sentence over again. But, shit, Chick Corea is a talented musician. People are strange ...

It beggars belief in my view Francis. Ah well I daresay there are many gullible folk

Any and all abuse heaped upon this charlatan is well deserved.