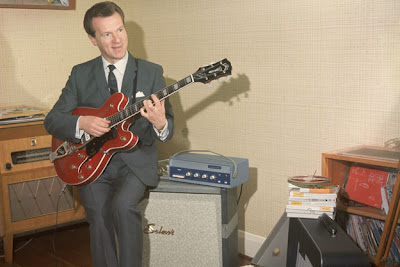 It looks like this April is a bad month for guitar fans. First  we saw the death of Ampmeister Jim Marshall, now Bert Weedon. He died yesterday morning at his home in Beaconsfiled aged 91, having been "poorly" for some time.


Acording to his Guardian obituary Weedon was born in east London and bought his first guitar  when he was 12. The man who became known as Mr Guitar started out playing with big bands including the hugely popular Ted Heath band, before starting on a solo career which saw him sell millions of records and notch up hits including Guitar Boogie Shuffle and Nashville Boogie.

The arrival of rock 'n' roll ended his run of hit singles, but provided him with a new role as an in-demand session man who played with stars including Cliff Richard, Adam Faith and Billy Fury. His first Play In A Day book was published in 1957 and the books have sold in their millions.

Clapton openly acknowledged his debt to Weedon, saying he had "never met a player of any consequence" who had not learned from the books.

Singer and guitarist Joe Brown said: "I am very sad to hear of the death of my dear old friend and brother Water Rat Bert Weedon who was a lovely man and a great inspiration to many British guitar players in the early days, myself included. My heart goes out to his wife Maggie and all the family."

Weedon is survived by his wife and two sons.

RIP Bert Weedon, the man who launched a million guitarists
Posted by jams o donnell at 12:19 am

It is sad, but he lived to a ripe old age.

Oh, he looks so smart with his grey suit and red guitar.

He did have a good innings.. and a snappy dresser too!