Some Muslim heroes of WWII 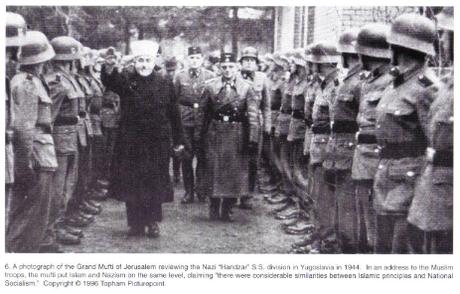 This shows the Mufti of Jerusalem, as vile a piece of excrement as ever lived, inspecting troops of the  13th Waffen SS Mountain Division which is better known as the Handschar Division. 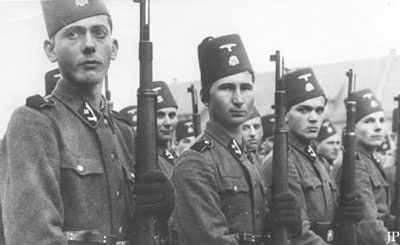 Again this Shows members of the Handschar Division, this time wearing fezzes.

While it is true that the Mufti of Jerusalem was an ardent supporter of the Nazis and the Handschar most certainly existed (as did the short lived Albanian Skanderberg Division, the 21st Mountain Division, and the even more short lived 23rd Mountain Division, the Hama, which was made up of  Bosnian Muslims), Rashid Ali staged a pro axis coup in Iraq in 1941 and Reza Shah Pahlavi definitely leaned towards the Axis (He was unseated by a British/Societ invasion of Iran in 1941), one gets the impression from the internet that all Muslms were pro Nazi in WWII.

For example, the odious Pam Gellar in her revolting blog Atlas shrugged quotes one Dr. Steve Carol, a retired  proffessor of History (retired) thus: That the overwhelming number of Muslims fought on the Axis side is historic fact – from the spy ring in Cairo (of which Nasser and Sadat were part) to the coup by Rashid Ali Gailiani in Iraq, to the Muslim Bosnian SS they favored the Axis and the Axis genocidal policies.

I have no idea if this quote is true or if Carol has been misquoted. If so, then Carol is telling only part of the story.

Leaving aside the many North African soldiers who fought in the Free French Army in WWII , or the Muslims in the Red Army, there was of course the Indian Army. Reaching a total strength of at 2.5million it was the largest all volunteer army ever created. I cannot find a definitive figure for the number of Muslims who served in the Indian Army but figures shown indicate that  around 1 solider in three was Muslim. This wold indicate that around 800,000 Muslims served  a figure far in excess of that who served the Nazis. A figure of 30% is largely consistent with the proportion of Muslim soldiers who fought in the Indian Army in WWI (400,000 out of a total of 1.3 million).

The Indian Army saw considerable action during WWII, from the East African campaing in Somaliland, Sudan and Ethiopia in 1940/41; Three Indian Divisions fought in the Eighth Army in North Africa and then in Italy; Indian soldiers took part in the invasion of Syria and Lebanon and against Rshid Ali in Iraq; they fought in the battle of Malaya and were present at the fall of Singapore and Hong Kong. Furthermore, they were a major part of Slim's 14th Army fighting in Burma. 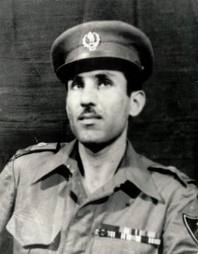 Mahmood Khan Durrani (above) was a captain in the 1st Bahawalpur Infantry. He was awarded the George Cross in 1946 for extreme courage displayed while in Japanese captivity/ This is his citation:

For outstanding courage, loyalty and fortitude whilst a prisoner-of-war.
With a small party he was cut off during the withdrawal in Malaya. They succeeded in remaining free in hiding for three months until betrayal, when they were arrested and confined. Refusing to join the I.N.A this officer devoted himself to rendering valuable service. He then conceived and put into execution, a plan for thwarting the Japanese plans for infiltrating agents into India. After many delays and set backs due to falling under suspicion he ultimately achieved much of his objective. Presumably as a result of the suspicion that he had been responsible for the failure of their plans, he was arrested by the Japanese. For ten days he was subjected to third degree methods including starvation, deprivation of sleep and physical torture such as the application of burning cigarettes to his legs. Subsequently he was given a mock trial and condemned to death but the execution was postponed in order that information should be extracted. He was then tortured by various particularly brutal methods continuously for several days. The exact time is uncertain as there were periods of unconsciousness, but it was certainly lasted for some days. No information whatever was obtained from him. Thereafter he was kept in solitary confinement for several months, with occasional interrogations and was given little medical treatment and just enough food to sustain life.

When finally liberated he was found to be permanently affected in health and still bears the marks of physical torture. He will never be the same again. Throughout he was fully aware of the possible consequences of his actions and, when discovered, he preferred to undergo protracted and cruel torture rather than confess his plans and save himself, because he still hoped that he might achieve his purpose. To confess would have endangered others' lives and might have influenced the enemy to change their plans. 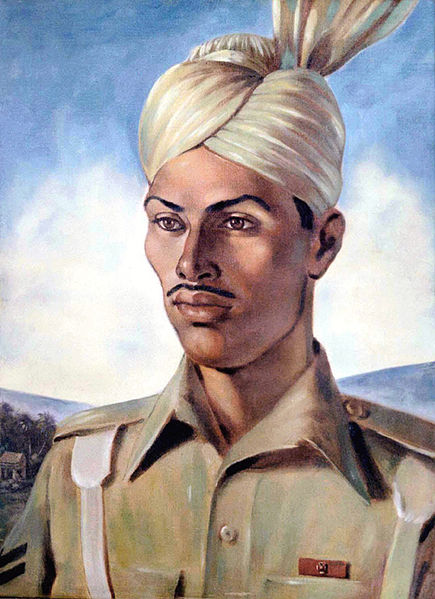 During the Second World War, Fazal Din's battalion, 7/10th Baluch, fought against the Japanese Army in the Burmese Campaign. On 2 March 1945, near Meiktila, Burma, No. 18602 Naik Fazal Din was commanding a section during a company attack on a Japanese bunkered position. His section was held up by machine-gun fire and grenades from several bunkers.
Unhesitatingly, he attacked the nearest position with grenades and silenced it; but as he led his men against the other bunkers, six Japanese soldiers rushed from a nearby house, led by two officers wielding swords. The section Bren gunner shot one officer and an enemy soldier, but ran out of ammunition and was killed by the second officer. Naik Fazal Din rushed to the assistance of his stricken comrade but the Japanese ran his sword through his chest. As he withdrew the sword, Fazal Din, despite his terrible wound, seized the sword from the Japanese officer and killed him with it. He then killed two more Japanese soldiers with the sword. Continuing to encourage his men, he staggered to his Platoon Headquarters to make his report. He collapsed there, and died soon after reaching the Regimental Aid Post. His action was seen by the whole platoon, who, inspired by his gallantry, continued the attack and annihilated the Japanese garrison of fifty-five men. Such supreme devotion to duty even when fatally wounded, presence of mind and outstanding courage have seldom been equalled and reflect the unquenchable spirit of a singularly brave and gallant NCO. For his incredible feat of valour, Naik Fazal Din was awarded a posthumous Victoria Cross 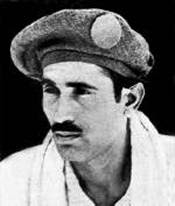 Ali Haidar (above) was a Havildar (sergeant) serving with Indian forces in Italy:

On 9 April 1945 near Fusignano, Italy, at the start of the Allied spring 1945 offensive Haidar's battalion was tasked with a difficult assault crossing of the Senio River. Only Sepoy Ali Haidar and the two other men of his section managed to get across under heavy machine-gun fire. Then, Without orders, and on his own initiative, Sepoy Ali Haidar, leaving the other two to cover him, charged the nearest post which was about 30 yards away. He threw a grenade and almost at the same time the enemy threw one at him, wounding him severely in the back. In spite of this he kept on and the enemy post was destroyed and four of the enemy surrendered. With utter disregard of his own wounds he continued and charged the next post in which the enemy had one Spandau and three automatics, which were still very active and preventing movement on both banks. He was again wounded, this time in the right leg and right arm. Although weakened by loss of blood, with great determination Sepoy Ali Haidar crawled closer and in a final effort raised himself from the ground, threw a grenade, and charged into the second enemy post. Two enemy were wounded and the remaining two surrendered. Taking advantage of the outstanding success of Sepoy Ali Haidar's dauntless attacks, the rest of the Company charged across the river and carried out their task of making a bridgehead. Sepoy Ali Haidar was picked up and brought back from the second position seriously wounded. The conspicuous gallantry, initiative, and determination combined with a complete disregard for his own life shown by this very brave Sepoy in the face of heavy odds were an example to the whole Company. His heroism had saved the rest of the company. With the rapid advance which it was possible to make the Battalion captured 3 officers and 217 other ranks and gained their objectives. The rest of the company were than able to cross the river and establish a bridgehead

I think these three citations speak for themselves.
Posted by jams o donnell at 11:10 pm

Anonymous said...
This comment has been removed by a blog administrator.
11:27 pm

Incredible stories. The link to Ali Haidar's Wikipedia page is broken though.

Thanks Kellie. Glad you found this nteresting. Will fix the Ali Haidar link

My family doctor (for 30 years) is a Muslim. I'm very sorry that he's retired now. Dr.Ismaël is such a decent, competent man. I always object when people put down all Muslims. We had long conversations and always respected one another's belief. He loves Canada. His daughters were born here. And I know he would have fought, with us, in WW2, if he had been old enough at that time.

He reflects the views of so many more Muslims than thoooose who would do Canada harm. It gets my goat that people focus on the Mufti and Handschar only and ignore the roles played by Muslims on the allied side in WWII