They also served: Siamese Troops on the Western Front

For all its faults Wikipedia is an excellent first stop for information. One subject where I relied on Wikipedia was for notifications of deaths of WWI veterans. My posts on the passing of these veterans has now finished as there are none now left but I was interested to see a list called Last Surviving World War I Veterans by Country A while ago I noticed that Siam was included on this list. I had not realised that Siam had supplied forces to fight the Central Powers.

Thailand 's last surviving veteran of World War I, Second Lieutenant Yod Sangrungruang, has died at the age of 106, reports said yesterday. Yod, who was a recipient of France's Legion d'Honneur award, was just 20 years old in 1917 when he joined 1,284 Thai soldiers in volunteering to fight with the Allies in France. He served as a mechanic in France before returning to Thailand in 1919 and was awarded a medal for his services from Thai King Rama VI. In 2000, French President Jacques Chriac awarded Yod the Legion d'Honneur, France's highest decoration. 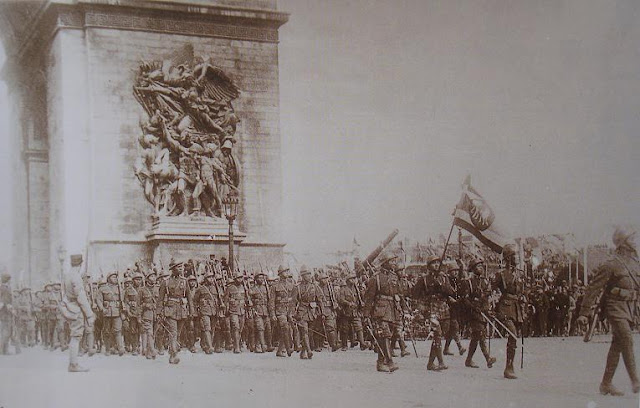 Siamese Troops on Parade in France in 1919.

Although Thailand had remained neutral since the outbreak of the First World War in August 1914 King Vajiravudh (Rama VI) and his nation enjoyed friendly relations with Germany, the King recognised the political value of throwing in his lot with the Allied Powers.

The monarch was convinced that participation would be an "…an excellent opportunity for us to gain equality with other nations."  Thailand had suffered from the imperial designs of both the British and French, particularly the latter, losing control of Laos and Cambodia and ceding four southern provinces in the years between 1889 and 1909.

Additionally, Thailand was forced to accept the imposition of extraterritorial rights for the citizens of nations such as France, Britain and the United States and King Rama VI was hopeful that Thai participation in the war would allow a revision of these unequal treaties.

Therefore, on 22 July 1917,  King Rama VI declared war on Germany and Austria-Hungary.  The Thais immediately interned and later seized as war reparations no less than 12 ocean-going ships of the North German Line.

Thailand sent a small expeditionary force consisting of 1,284 volunteers under the command of Major General Phya Pijaijarnrit  to serve with the British and French forces on the Western Front.  Included was a contingent of the Army Air Corps. Thy in 1918 and the air personnel began training at the French Army Flying Schools.  Over 95 men qualified as pilots. It is not absolutely certain whether the pilots  saw active service: some sources indicate that they made their first sorties in the final weeks of the war; although others claim the Thais finished their training too late to take part.

There was also a medical unit which included nurses and it is claimed these were the only women to serve in the trenches of the Western Front. The Thai contingent marched in a victory parade in Paris on 19 July 1919 and arrived back in Thailand on 21 September 1919.  A war memorial was erected in honour of the troops and stands in Sanam Luang park in Bangkok (above).  Inscribed are the names of the 19 soldiers killed in action on the Western Front.

Thailand also participated in the Versailles Peace Conference and in January 1920 it  became a founding member of the League of Nations.Later that year the King's decision to go to war was vindicated when the United States ceded her extraterritorial rights.  France, after five years of extensive negotiations relinquished her rights in February 1925 while Britain signed a treaty to the same effect in July the same year.

In military terms the Siamese contribution to WWI was insignificant but the poilitical capital it earned the country was inestimable (do not think I am belittling these men and women for a single moment).
Posted by jams o donnell at 12:27 pm

Glad you found it interesting

I love your posts on events which somehow are so badly ignored by the mass media. You bring fascinating facts to our attention. And they add to the larger picture. Those stories deserve to be known.I'm glad the Siamese participation earned the country its independence.

It may be a fotnote in the course of WWI but it was a shrewd move on the part of King Rama.And a successful one too!

Wow, Jams, you succeed to dig up some great stories. Thanks.

Thanks Snoopy. I do like this sort of thing