Speedy spent only a brief time flying colours. On 25 March 1795 her captain mistook Captain Thomas Fremantle's Inconstant for a French ship and she was recaptured. Taken back into British service, she was under the command of Thomas Elphinstone from October 1796.

In March 1797, Speedy joined a squadron cruising off Oneglia, Italy, under Commodore Horatio Nelson. On 31 March the French ketch Genie, a gunboat and four merchant ships were chased by the squadron and took refuge near the guns of a shore battery. Agamemnon, Blanche, Peterel and Speedy approached them disabled the shore battery, then sent in several boats which successfully boarded and captured both ships and the merchantmen, Elphinstone was succeeded in August 1797 by Commander Hugh Downman, who made several cruises with Speedy. On 3 February 1798 she encountered the large privateer Papillon, After a two day fight (by which Downman had exhausted his supply of shot, and resorted to firing nails and pieces of iron hoop at his opponent. He also had a reduced crew with several being off in a prize). The Papillon was driven off; Speedy suffered losses of five killed and four wounded. During his time in command of Speedy, Downman captured five privateers. For his efforts in protecting British trade out of Oporto, the merchants presented him with a letter of thanks, and a piece of plate valued at £50.[12] As a reward for his good service, Downman was advanced to post-captain on 26 December 1798 and appointed commander of the 32-gun HMS Santa Dorothea. Downman eventually reached the rank of Admiral. 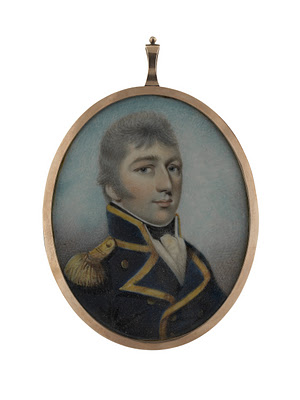 Jahleel Brenton
Downman was succeeded in January 1799 by Commander Jahleel Brenton, who was based at Gibraltar. While sailing off Gibraltar in company with the British privateer Defender on 9 August 1799, Brenton came across three small Spanish warships which ran into a small sandy bay and anchored in a line so as to bring their guns to bear simultaneously on the British ships. Speedy and Defender sailed up and down for two hours firing broadsides, but without much effect before Defender decided to sail further out to sea. Brenton  anchored Speedy within 30 yards (27 m) of the middle ship and the two exchanged a fierce cannonade for three quarters of an hour, after which the Spanish abandoned their ships and made for the shore.Two of the ships ran ashore and the third was immediately captured. Speedy managed to get the other two vessels off and took them into Gibraltar. 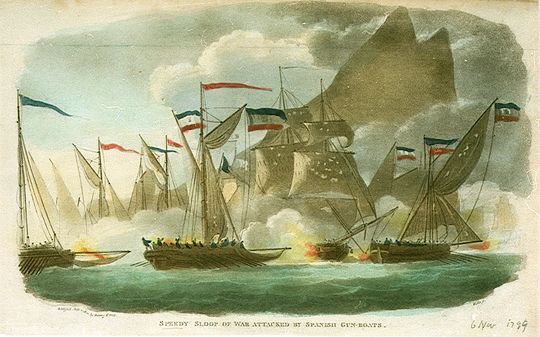 On 3 October Speedy, spotted ten small gunboats coming out of Algerica apparently attempting to attack a British convoy that was then passing. On Speedy's approach, they scattered, four sheltering under a fort. Speedy approached and fired on them, causing their crews to abandon their ships.They were driven ashore by the wind, and reduced to wrecks. Three days later, Speedy was standing off Europa Point when twelve gunboats were sighted coming out of Algeciras to attack two merchant ships making their way past Gibraltar. Their combined firepower far outweighed that of Speedy, but Brenton turned his ship towards them, covering the escape of one of the merchantmen with his fire.  Brenton took his ship through the flotilla, close enough to break many of their oars, maintaining a constant fire from his guns and with every spare member of the crew firing muskets. The Spanish flotilla broke and fled. Speedy suffered two men killed and one wounded, and sustained considerable damage to her rigging and below her waterline. Brenton was promoted to post captain  and subsequently attained flag rank.

Brenton was promoted to post-captain, and in March 1800 command passed to Lord Cochrane.

In May while Cochrane was escorting a convoy from Cagliari to Leghorn he captured the privateer  He was then given a free hand to raid enemy shipping in the area, and captured seven or eight vessels that June and July, including the privateere Asuncion and Constitution. On 22 September he captured a large Neapolitan vessel.

Realising that the Spanish wanted to capture ir destroy the Speedy Cochrane painted the ship to resemble the Clomer, a Danish brig then in the Mediterranean, the Clomer. He also appointed a Dane as quartermaster and found him a Danish naval officer's uniform. While cruising off Alicante on 21 December, Speedy encountered an enemy frigate, but tricked her into thinking she was a neutral vessel. Cochrane again used this false flag technique to his advantage; on 22 January he was sailing with a convoy of Danish merchantmen under a Danish flag, pretending to escort them. When a 10-gun French ship and 8-gun Spanish brig approached, Cochrane hoisted British colours and attacked, capturing both of them

It was after these adventures that came the incident that was the Speedy's finest moment.
Posted by jams o donnell at 6:42 pm