Backwaters of history - When merchantmen defeated the French

Artistic representation of the battle of Pulo Aura
Regular readers will know that I have a liking for  obscure events of history. This post concerns the Battle of Pulo Aura, a minor naval engagement of the  Napoleonic Wars, fought on 14 February 1804, in which a large squadron of Honourable East India Company (HEIC) East Indiamen, drove off and chased a stronger and more powerful French naval squadron under the comand of Contre-Admiral Charles-Alexandre Durand Linois. While this actions pales in comparison with Trafalgar, the Nile, Camperdown or Santo Domingo it shows that "John Company" was not a push over at sea

The HEIC fleet under the command of Commodore Nathaniel Dance  to retire after only a brief exchange of shot. Dance then chased the French warships until his convoy was out of danger, whereupon he resumed his passage towards British India. Linois later claimed that the unescorted British merchant fleet was defended by eight ships of the line, a claim criticised by contemporary officers and later historians. 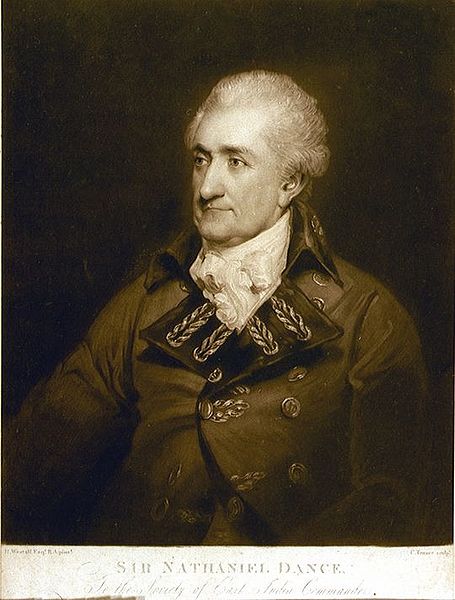 I had not heard of this action until I first read HMS Surprise, the third in Patrick O'Brian's magnificent Aubrey/Maturin series. In this book Jack Aubrey  and the firgate HMS Surprise are instrumental in the defeat of Linoi' squadron. While the addition of "Lucky Jack Aubrey" to the mix, while a wonderful read, does detract slightly form the courage of Dance and his officers and men. That said it does provide a bit of payback for Aubrey's capture by a ship under Linois' command in the first book Master and Commander. (In real life it was of course Lord Cochrane who was captured)


Linois had sailed to the Indian Ocean in 1803 before the Treaty of Amiens was torn up, under orders to install garrisons in the French and Dutch colonies in the region and to prey on lightly defended British merchant shipping. One of the richest and most significant targets was the "China Fleet", an annual convoy of East Indiamen from China and other Far Eastern ports that carried millions of pounds worth of trade goods. Although these large vessels were accompanied by numerous smaller merchant ships, news of the outbreak of war had only just arrived in the Pacific and the only warship available to defend the fleet was the small HEIC armed brig Ganges. Dutch informants notified Linois of the fleet's destination and date of departure from Canton while he was anchored at Batavia on Java, and he sailed in search of the convoy on 28 December 1803, eventually discovering it in early February 1804. 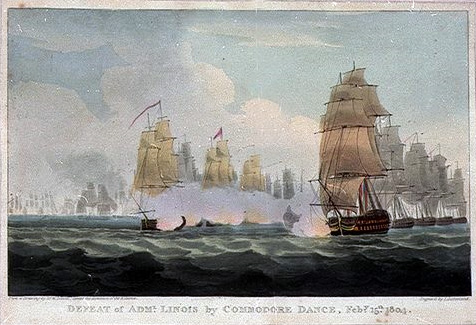 Commodore Dance knew that lookouts could, from a distance, mistake a large East Indiaman for a ship of the line. He raised flags that indicated that his fleet included part of the Royal Navy squadron operating in the Indian Ocean at the time and formed into a line of battle. Although Linois's ships were clearly superior, the British reaction unnerved him and he quickly broke off combat. Dance continued his ruse, pursuing Linois for two hours until the body of the convoy was safe. King George III knighted Dance for his courage and various mercantile and patriotic organisations awarded him large sums of money, while both Linois's own officers and the Emperor Napoleon personally castigated the French admiral for his failure to press the attack against a weaker and extremely valuable enemy. Although he remained in command of the squadron for another two years and had some minor success against undefended merchant ships, he suffered a string of defeats and inconclusive engagements against weaker British naval forces. Ironically, Linois was captured at the Action of 13 March 1806 by a numerically superior British battle squadron that he mistook for a merchant convoy.

This was a remarkable victory. While "John Company" ships were well armed for merchantmen, the were no match for a well armed squadron. It goes to show that Dance, his captains and his men were every bit as brave as as Manowarsmen

NOTE: BEFORE ANYONE GOES OFF THINKING THAT THIS WAS ANOTHER EXAMPLE OF THE FRENCH BEING CHEESE EATING SURRENDER MONKEYS, LINOIS WAS A CAPABLE AND EFFECTIVE COMMANDER WITH A DISTINGUISHED RECORD. The high mark came in 1801when he defeated  the great Admiral Saumarez at the first battle of Algeciras
Posted by jams o donnell at 5:19 pm

There's always been a privateer element to our seafaring.

Who ever said that the French were cheese eating surrender monkeys? Never heard of La Résistance Française?

It was an expression coined by the Simpsons in jest but a lot of Americans seem to think the French can't fight This is of course bollocks and says a lot about the crass arrogance of your southern neighbour who forget that the French sealed the existence of their country in the first place.

Perhaps France should take back the Sttue of Liberty!

John Company was never to be underestimated. Trade follows the flag? It was often the other way around - the flag follows trade.

As yet, I've only read the first volume of O'Brien's Jack Aubrey series, though I do have all the others on my Kindle. I do plan to read them as well! :-)

Your journeys down the backwaters of history are fascinating.

As for the adventures of Jack and Stephen you are i for a treat. Some books feature real events - Cochrane's command of the Speedy (as Jack in the Sophi), Cochrane's stock market trial (Reverse of the Medal) and Cochrane in Chile (Blue at the Mizzen), The Mauritius campaing (Mauritius Command) and the Shannon's victory over the Chesapeake *Fortune of War). The books are a superb read. THey are not bif o action but you find yourself losing yourself in the rhythm of the sea.

I truly enjoy your posts, Jams. And O'Brian's tales are very exciting to read, and to watch.