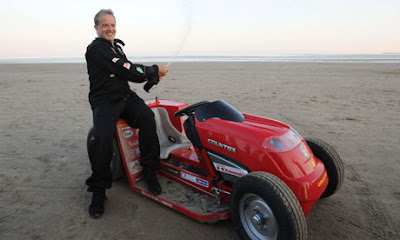 Last weekend he joined is august relatives as a landspeed record holder. It is not the absolute record – that is still with Andy Green and Thrust SSC but he is the fastest ever person on a lawn mower.

The setting of the record attempt was Pendine Sands in Carmarthenshire which saw Malcolm Campbell, Jon Parry-Thomas and Henrey Segrave break land speed records in the 1920s. He smashed the previous record - 80.792mph - hitting 86.069mph on Saturday then 87.833mph on Sunday.

"We are very excited and very pleased to have beaten our own record today," said Clare Hansley-Boyd, a spokeswoman for the British team. "We have finished the weekend as world record holders and have improved on yesterday's speed – so we are happy with that."

For the record attempt to qualify, challengers have to use a machine that is certified to be built primarily from lawn mower parts. Proof that it is a mower also has to be produced before the speed attempt, with a public grass cutting demonstration.

The team had hoped to break 100mph, but in the end settled for 87mph. "They're very tired after the efforts they put in over the weekend," Hansley-Boyd said. "It's a bit early to say where we'll be going from here, but I think the 100mph target is something everyone will be aiming at for the future."

Don Wales we salute you
Posted by jams o donnell at 9:42 pm

87mph on a lawnmower? Brave or foolhardy?

If he did 10 mph in a dishwasher or
20 MPH with a vacuum cleaner I would be impressed.

Give it a try Beak!

I think he works for my local Council. Their lawn mowers seem to be doing those speeds when they cut the grass rouns here.

here's the video of Don Wales breaking the record-

Excellent stuff. THanks for the link JD