Meet Hando and he looks pissed off 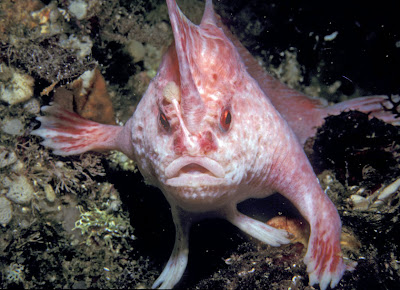 Hot on the heels of discovering a jellyfish looking like a city of gonads, scientists at CSIRO in Hobart, Tasmania have discovered a species of fish that walks rather than swims.

A relative of the angler fish The handfish is only found in Australian waters and walks the seabed on hand-like fins.

The CSIRO's Daniel Geldhill said "Ideally we would have had more specimens for many of these species but due to conservation concerns there comes a point where we need to get names on them to make it easier for managers, and for us, to keep an eye on how they're going," he said.

Fourteen species have now been revealed.One of those newly-named is the Pink Handfish. Only four specimens have ever been found, the last one being on the Tasman Peninsula in 1999.

"The whole family is endemic to Australia which means they are only found in Australian seas and so it's quite unusual in that regard. Many are limited to the south-east and particularly Tasmania," Mr Gledhill said.

Nic Bax of the University of Tasmania says there has been a noticeable decline in some species including the spotted handfish. "We actually hope that given the [River] Derwent is really cleaning up again since the 1960s, that possibly now is the time that this species might really recover. It does have quite a history. They're obviously a very unique fish which people notice and they are undeniably cute," he said.

Wow, I had never even heard of these fish until today. It’s good to learn something new each day.
Posted by jams o donnell at 7:47 pm

He does look seriously grumpy!

Someone spilled his pint!

haha... is that what made him so frowny?

Dunno Myra but it looks like someone is in for a leathering!

It's so strange eh Rachel?

he looks like he is on his way to the local deli counter. I can see it now in Neptune's Deli.

"I ordered monkey. Not this Davy Jones clown on pumpernickel."